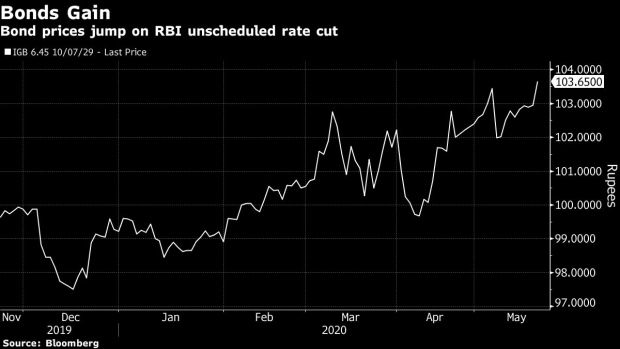 (Bloomberg) -- Sovereign bonds in India rallied after the central bank cut its benchmark policy rate in an emergency session as the economy reeled from the coronavirus outbreak.

The yield on the most-traded 2029 bonds fell 11 basis points to 5.93% as of 10:40 a.m. in Mumbai, while that on the new 10-year notes dropped three basis points after falling by as much as six points. The rupee weakened and stocks reversed gains to halt a three-day rally.

The Reserve Bank of India slashed the benchmark repurchase rate by 40 basis points, offering more support for an economy headed for its first full-year contraction in more than four decades. Bond traders have been calling for more support with concern mounting over a surge in government borrowings.

Average yields on top-rated rupee-denominated corporate bonds maturing in 10 years fell 15-20 basis points on Friday, according to traders. The decline would be the most since May 8, according to data compiled by Bloomberg

“The RBI cuts may not overwhelm the market and the rally may not last beyond a few days as the market was expecting a 50 basis point cut,” said Naveen Singh, head of fixed-income trading at ICICI Securities Primary Dealership. The market needs to see a bond purchase calender given the huge supply of debt, he said.

India’s economy is heading for a 45% contraction in GDP in the quarter through June, according to Goldman Sachs Group Inc., and facing a full-year decline as consumption -- the backbone of the economy -- collapsed due to the government’s strict stay-at-home measures. Large swathes of the population have been left destitute, with an estimated 122 million people losing their jobs in April, many of them daily wage earners, a survey by the private sector Center for Monitoring Indian Economy showed.

“The central bank’s worries around economic growth are dragging the equities down,” said Sameer Kalra, an investment strategist at Mumbai-based Target Investing. “Rate cuts don’t matter as much as nobody wants take or give loans as confidence is lacking.”