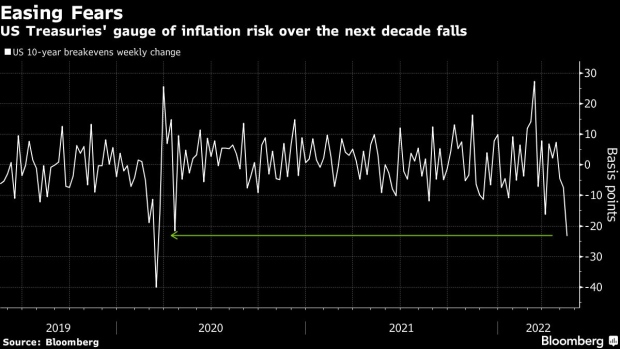 (Bloomberg) -- US Treasuries and German government bonds fell for the first time this week, trimming an explosive rally as investors weigh the economic fallout from aggressive central bank tightening.

The yield on 10-year U.S. and German debt rose as much as 8.5 basis points to 2.93% and 10 basis points to 0.94% respectively, trimming a slide that’s pushed yields down more than 20 basis points over the past five sessions, the most since early March.

Federal Reserve Chair Jerome Powell reaffirmed that the central bank is likely to raise interest rates by a half percentage point at each of its next two meetings, while leaving open the possibility it could do more.

The pullback comes as investors squared positions before the weekend, having piled into sovereign debt amid signs rising consumer prices could be peaking, despite a hotter-than-expected inflation reading in US. Indications that the European Central bank intends to start raising rates in July is adding to speculation policy makers are determined to tighten policy at the expense of economic growth.

“Nothing much has changed on the fundamental level over the last few days. If anything, the US CPI data was stronger and comments from the ECB speakers have been more to the hawkish side,” said Mohit Kumar, a strategist at Jefferies International, who recommends a small short on US Treasuries and bunds. “The key question is whether positioning related flows are done and whether risk sentiment should stabilize going forward.”

The tug-and-pull of inflation and growth concerns has interrupted a bearish trend in bonds. Price swings remain unusually large, with a gauge of volatility in U.S. Treasuries holding around its highest since March 2020.

Market gauges of inflation expectations in the US and Germany tumbled to the lowest in around two months. The US 10-year breakeven rate, or the difference between nominal and inflation-protected yields, has slumped 20 basis points this week, on course for its biggest fall since March 2020.

The equivalent German gauge fell 22 basis points this week. The U.K. inflation market was an outlier as breakevens gained.

“The Federal Reserve is likely pleased that inflation expectations have been drifting lower since the FOMC,” said ING Bank NV strategists including Antoine Bouvet. “The peak inflation narrative has allowed the market narrative to quickly move on to macro concerns.”