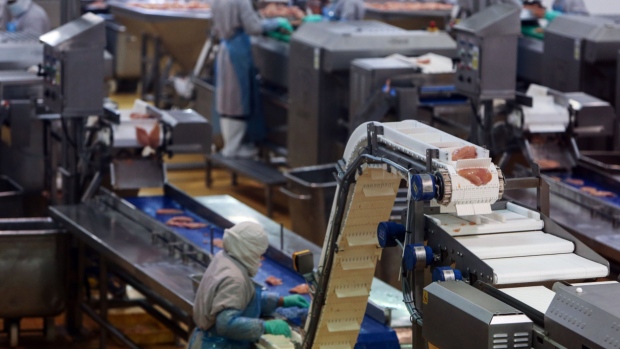 Food retailers across North America are swapping boneless chicken legs for less popular thighs and drumsticks as a wave of shutdowns at meatpacking plants has reduced supplies of sought-after cuts.

Covid-19 infections among workers at some of the largest meat processing plants in the U.S. and Canada have reduced slaughter capacity, and in some cases the types of cuts available. Outbreaks have shut down almost a third of U.S. pork capacity and the growing wave of disruptions has spurred plans by President Donald Trump to order meat-processing plants to remain open.

In Canada, Cargill Inc. has idled its beef plant in High River, Alberta, which accounts for about 40 per cent of Canada’s processing capacity while JBS SA’s beef plant in Brooks, Alberta, is running at about half capacity.

Quebec-based Goodfood Market Corp., which delivers meals on a subscription basis, said it will be substituting its regular boneless chicken for bone-in thighs, legs and drumsticks as the poultry industry shifts away from de-boning to ramp up production.

“Poultry suppliers are still facing labor shortages and many of them are operating with less than 50 per cent of their regular workforce,” Goodfood Chief Executive Officer Jonathan Ferrari wrote in an email to customers.

“To ensure the essential supply of chicken for Canadians across the country, the poultry industry as a whole is shifting away from de-boning chicken legs to increase their production capacity.”

Ferrari also wrote that the company is working to secure a frozen beef supply in case shutdowns at Alberta’s beef suppliers disrupt the supply chain.

Grocers generally are accepting cuts of meat that require more cutting by their in-house butchers to keep their meat counters as full as possible, said Michael Young, president of Canada Beef.

Meat such as sirloin and strip loins that would have typically been sent to restaurants before the pandemic shuttered businesses are now increasingly sold by retailers who are offering them in different sizes to get the price point down, he said. Companies are taking products that would have been used by the food service industry and redirecting it for retail sale. That means forgoing thin-cut meats that would require more time to process.

Grocers are also trying to find a way to sell so-called “end cuts” from the leg or trunk that consumers may be unfamiliar with. That includes promoting the idea of grilling marinated round steaks -- from the leg of a cow -- on the barbecue to make it more tender, Young said.

Consumers in grocery stores around the world might notice larger packages of meat instead of individual steaks or smaller portions, said Brian Sikes, head of Cargill’s protein and salt businesses. While the company’s plants primarily produce the same products for retail and food-service, they might cut or package them slightly differently, he said.

Even in Europe, where supply disruptions have not been as severe, grocers are trying to get retail customers to eat cuts of meat that restaurants usually buy. In the U.K., there’s been an uptick in sales of steaks and other cuts of meat less popular with retail customers, according to Nick Allen, chief executive of the British Meat Processors’ Association. Big retailers have been putting these cuts on sale to encourage shoppers to buy, Allen said. A lot more ground meat is typically sold by comparison, which causes an imbalance.

“We’re just waiting to see if enough has changed to eat our way out of the problem,” Allen said.

--With assistance from Isis Almeida, Greg Ritchie and Jonathan Roeder.