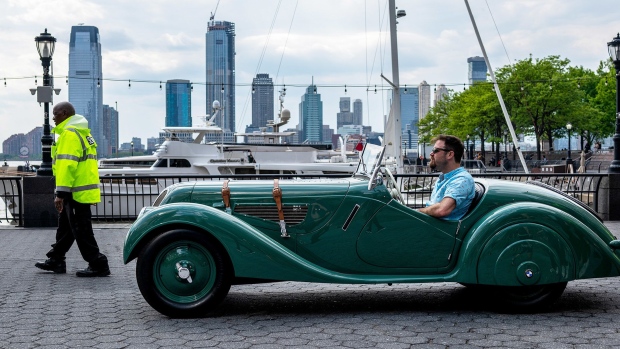 Market US will be the first ongoing online car auction hosted by a major house, coming on the heels of a sister site launched for Europe in September. Unlike a normal auction, in which a large group of cars is assembled and sold all at once to the highest bidders, the Market will operate on a rolling basis, almost like a consignment website.

Organizers say Bonhams is aiming its sights (and site) right at Bring a Trailer (BaT),  the category leader launched seven years ago, on which sellers pay $99 to list vehicles for a public, live sale online. (Bidders must register using a credit card number to ensure their commitment.) BaT boasts 200,000 registered bidders and 450,000 users, many of which leave impassioned comments as they watch auction bids accrue.

“Bonhams saw what was going on with competitors like Bring a Trailer—that they were being extremely successful during Covid—and thought this isn’t going to end,” says Caroline Cassini, the 29-year-old general manager of Market US. “This gives us an opportunity to reach a broad base.”

Bonhams joins a crowded online marketplace for selling used autos. Ebay Autos, Craigslist, and Hemmings have done it for years. BaT, originally a car blog co-founded by Randy Nonnenberg and Gentry Underwood, launched in 2007; the auction portion opened in 2014. RM Sotheby’s, Gooding & Co., and others have been holding limited-run car auctions online with some degree of frequency since Covid-19 forced them to shutter live auctions in March 2020.

Recently, Porsche-focused PCARMarket, CarsandBids.com, and AutoHunter.com have joined the field. Collectingcars.com, which launched in 2019, has sold more than £160 million ($219 million) worth of cars through the platform, with £60 million of that in the past five months alone, a spokesman said.

Online platforms’ share of sales are indeed way up. They grew from 12% of all auction dollars at the beginning of 2020 to more than 68% by April, John Wiley, a senior analyst for Hagerty, wrote in a market report. According to Truecar.com, 40% of new and used vehicle purchases will be digital by 2025.

Market Europe, meanwhile, is already boasting a 90% sell-through rate on its Instagram page. Most sell-through rates at live auctions run from 70% to 90%. During the auctions at Pebble Beach earlier this year, for example, Gooding & Co. realized an 87% sell-through rate. A Bonhams spokesperson declined to provide information about specific sales.

“Online auctions have effectively taken the place of live auctions for many vehicles,” Wiley said.

To the Market Born

Bonhams’s challenge will be differentiating itself against staunch competition. The site promises 5% sellers’ fees and, crucially, no buyers’ fees. That’s a deal, compared to the 5% buyers’ fees at BaT and the 10% or 20% such fees traditionally applied at live auctions. Bonhams also promises more than 300 photos of each vehicle will be listed to assist virtual vetting—but caveat emptor will apply as much as ever.

“Inspection will be up to the seller and the potential buyer; we don’t have the car in our hands,” Cassini says. “If a buyer and seller can meet up and do a pre-purchase inspection, we encourage that.”

Prewar cars will be a particular specialty at Market US, says Cassini, even though those vehicles generally cost far more than the $100,000 mark she says the bulk of sales will hit. A segment that remains virtually absent from other online sellers, prewar cars are vehicles built before the start of World War II (which began in 1939), including the BMW 328 Roadster, Duesenberg Model J, and Lincoln Zephyr. While the general rule of thumb has been that people who tend to buy such expensive relics are themselves aging and unlikely to buy in a virtual environment, Cassini says that this is changing.

“Bonhams has been well respected selling prewar vs. some of the other auction houses, so we will be utilizing that our advantage here,” she says. “Bring a Trailer and other auction websites don’t have the client database that Bonhams does to sell prewar items.”

There will, of course, be so-called “youngtimers” favorites from the 1980s and ’90s for sale at Market US, too, along with a bountiful heap of collectible BMWs and Aston Martins. Last month, Market Europe sold a blue Ferrari F40 for more than £1 million ($1.35 million). A spokesperson forMarket US declined to share what cars specifically would be listed for U.S. sale come January.

Cassini comes to the job particularly well groomed to navigate such waters. Her father, retired New Jersey Superior Court Judge Joseph Cassini III, has long owned seven-figure blue-chip classics, such as a 1934 Packard 1108 Twelve Dietrich Convertible Victoria and a 1938 Horch 853A Erdmann & Rossi Sport Cabriolet. The cars were Best of Show champions at the Pebble Beach Concours d’Elegance in 2013 and 2004, respectively. Her Denmark-born fiancé, Jakob Greisen, is the head of Bonhams’s U.S. Motoring Department and vice president of the auction house.

In 2018, Cassini became the first woman to graduate from the Academy of Art University’s prestigious Automotive Restoration program in San Francisco. Last year, working for Fantasy Junction, a vintage auto dealer in Emeryville, Calif., she oversaw the sale of a 1935 Auburn Boattail Speedster. It sold—online—for $850,000.