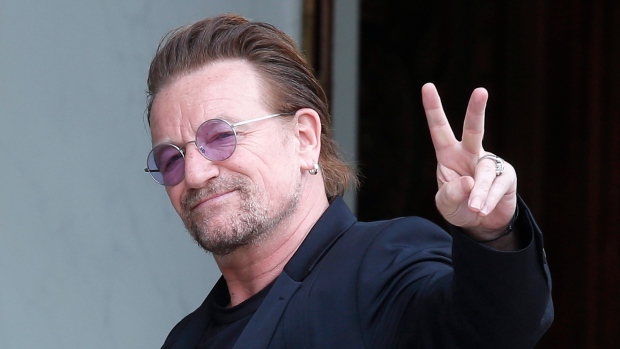 In this July 24, 2017, file photo, U2 singer Bono makes a peace sign as he arrives for a meeting at the Elysee Palace, in Paris, France. , The Canadian Press

Financial technology startups are grabbing a greater share of capital from investors. Now Bono is getting in on the action.

The Rise Fund, a private investment fund co-founded by the U2 lead singer, is making its first known bet on a fintech business by backing Acorns Grow Inc., the companies confirmed on Friday. Acorns offers an investing-and-savings app tailored to people with small amounts of disposable income.

“I think TPG saw our high impact on top of a great business model and decided to invest,” Acorns Chief Executive Officer Noah Kerner said in an interview. “We’ll be continuing to grow current products and add others with the new funding.”

Acorns is part of a growing list of startups offering digital wealth management services. Some 2.7 million people use the app to put spare cash into exchange-traded funds managed by Vanguard Group Inc., BlackRock Inc. and others.

The Irvine, California-based startup has more than $500 million in assets under management, according to a filing with the U.S. Securities and Exchange Commission. The average account balance for each client is much lower than other digital wealth startups by design. Acorns clients have less than $500 on average compared with about $43,000 for Betterment LLC.

Analysts have expressed skepticism about whether Acorns can ever become profitable managing such small amounts per customer. Venture capital backers have said Acorns could someday market higher-margin products to a large customer base. The startup has begun taking steps to do that. Late last year, it acquired Portland-based Vault, which lets customers automatically invest part of their paycheck into a retirement fund. Acorns has said it plans to use the technology to offer an individual retirement account.