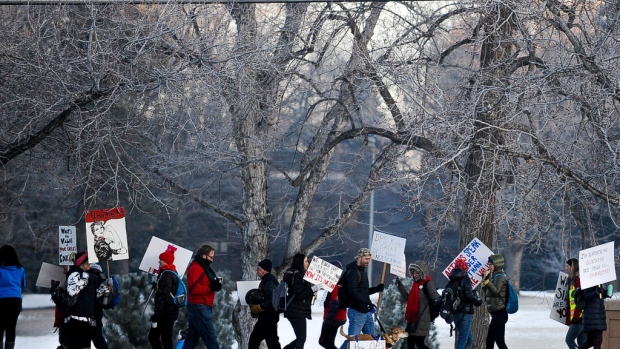 DENVER, CO - FEBRUARY 11: Denver Public Schools teachers and members of the community picket outside South High School on February 11, 2019 in Denver, Colorado. Denver teachers are striking for the first time in 25 years after the school district and the union representing the educators failed to reach an agreement after 14 months of contract negations over teacher pay. (Photo by Michael Ciaglo/Getty Images) , Photographer: Michael Ciaglo/Getty Images North America

(Bloomberg Opinion) -- Fourteen years ago, Denver public schools embarked on what was hailed as “the most ambitious teacher compensation plan ever attempted.” It was thoughtfully planned, following a years-long pilot program. It won approval from teachers, businesses, local philanthropies and voters.

Yet, somewhat prophetically, a 2005 study of the pilot program on which the Denver incentive-compensation model was based declared that it “demonstrates why, even with thoughtful pilot leadership and broad support, a strict pay for performance system — where performance is defined as student achievement — is an inappropriate model for education.”

Now Denver teachers are on strike, and the merit-based compensation system is the key reason. It has evolved since that original pilot and now rewards far more than student performance; a chief target of striking teachers, for example, is the bonuses given to staff in high-needs schools.

Indeed, the union charges that the compensation system is overly complicated and unpredictable. At the same time, base pay in Denver, which averaged about $57,000 this year, has failed to keep up with inflation and is “among the lowest in the country when adjusted for cost of living,” according to Paul Teske, the dean of public affairs at the University of Colorado Denver.

As states scramble to placate teachers who have staged a wave of walkouts and strikes during the past year, and to fend off an exodus of teachers from the classroom, they are confronting the need to raise wages, which in most states remain stuck below 2008 levels. For many states, incentive compensation has the appeal of promising pay for performance without substantial increases in spending.

In Texas, for example, where cities were trying to lure striking teachers from neighboring states with offers of a $52,000 starting salary, Texas Governor Greg Abbott called the need to raise teacher pay an “emergency” last week. But Abbott is also promoting a merit pay plan modeled on one in Dallas, which teachers have criticized for its “unfair distribution of bonuses” and an over-reliance on student test-score data. Indeed, not a single teacher in Dallas has reached the system’s highest theoretical evaluation and pay level.

Incentive pay to improve education and teacher performance is an elusive goal at best. A key assumption behind pay for performance is that money motivates individuals to work harder and better. CEOs, in particular, have invested the paycheck with almost magical powers to manipulate performance, arguing that individuals respond to external incentives and that money is the best motivator. Even multimillionaire bankers respond to incentive pay — not because the extra money necessarily makes a difference, so the argument goes, but because it is a way to “keep score.”

Performance-pay systems also can lead to unintended consequences that produce poor quality and even fraud. The 2008 financial crisis was attributable, at least in part, to bank loan officers who approved bad loans in order to earn bonuses. A scandal at the Veterans Administration in 2014 was linked to a pay scheme that incentivized administrators to shorten waiting lists at veteran’s hospitals, but instead led them to falsify records so they could collect bonuses.

Frederick Herzberg, whose 1968 treatise against incentive pay, “One More Time: How Do You Motivate Employees?,” was the most-requested Harvard Business School article for decades, explained why money doesn’t motivate in the long term. Money, he argued, is a “hygiene factor”: Not enough of it causes distress, but money alone has little to do with job satisfaction or performance.

The research on teacher incentives is contradictory and ultimately inconclusive. A much-cited 2010 Vanderbilt University study showed that the performance of teachers who were offered a bonus of up to $15,000 was no better than that of teachers who were offered no incentive. A more recent Vanderbilt metastudy and a 2017 study of the federal Teacher Incentive Fund found very modest gains in test scores. Yet, research on an experiment with pay incentives in New York City by one of the leading researchers on education incentives found that “if anything, teacher incentives may decrease student achievement, especially in larger schools.”

It was a 2012 survey of 40,000 teachers funded by Scholastic and the Gates Foundation that may be the most telling. It found that only one-quarter of teachers felt that performance pay was likely to have a strong impact on student achievement. Instead, what the teachers valued the most, according to the study, was “supportive leadership, family involvement in education, access to high quality curriculum and student resources, and time for collaboration with colleagues.”

Avi Tropper, the former principal at Northfield High School in Denver, agrees. Bonuses rarely “influenced the decisions of teachers,” said Tropper, who now works in New York City as an education consultant. “When I was hiring dozens of teachers at a brand new school, not a single teacher asked about ProComp,” as the compensation system is called, only about base pay.

At the same time, incentive pay is often perceived as unfair. Evaluation systems linked to single metrics, like test scores, are easily gamed — for example, by making tests easier or more difficult. More-nuanced approaches that include multiple measures, such as principal evaluations, graduation and attendance rates, are often seen as too subjective. Even group incentives make sense only if they focus on small groups with interrelated responsibilities.

Denver’s system has come under fire for its complexity and for constantly moving the goal posts. The system has 10 bonus categories — some individual incentives, some tied to rewarding teachers in high-achieving schools, others designed to staff high-needs schools. The formula for calculating incentives also changes frequently.

The reputation of ProComp has also suffered as employee-evaluation systems increasingly seemed geared toward weeding out bad teachers, rather than supporting good ones, according to the University of Colorado’s Teske. A Colorado law passed in 2015 pegged half of a teacher’s evaluation to student academic growth and was seen as punitive — though the evaluation and bonus systems were never fully linked, according to Teske.

Yet the idea of incentive pay remains popular in many circles. Both local and national philanthropies, including the Eli and Edythe Broad Foundation, have backed Denver’s incentive plan over the years. The bonuses are paid for with a tax increase passed by voters in 2005 that is now worth $33 million — one reason it is difficult for Denver to get rid of its merit-pay plan entirely.

The biggest problem remains low base pay. Improving teacher salaries may be the best solution to a chronic problem that plagues Denver and cities nationwide — high teacher turnover.

To contact the author of this story: Andrea Gabor at Andrea.Gabor@baruch.cuny.edu

To contact the editor responsible for this story: Philip Gray at philipgray@bloomberg.net

Andrea Gabor, a former editor at Business Week and U.S. News & World Report, is the Bloomberg chair of business journalism at Baruch College of the City University of New York and the author of "After the Education Wars: How Smart Schools Upend the Business of Reform."