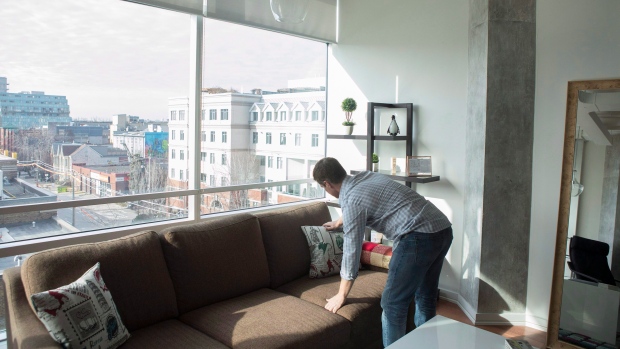 Kevin Makra is pictured preparing for guests in his Toronto rental apartment, on Saturday, December 2, 2017. , The Canadian Press

Booking.com, the flagship site of travel giant Booking Holdings Inc., said it has 5 million non-hotel listings. That’s more than Airbnb Inc., the highly valued startup credited with kicking off the recent trend of staying in peoples’ homes rather than hotels.

Booking Holdings, which changed its name from Priceline Group Inc., said the number of apartments and vacation homes on Booking.com has grown 27 per cent to 5 million in the last year. Airbnb, founded in 2008, said it has about 4.85 million, including an estimated 200,000 hotel rooms. Booking had previously only disclosed the number of non-hotel “properties” on its platform, which could have included multiple listings.

Older online travel companies like Booking and Expedia Group Inc. have long been in the business of helping people book accommodations other than hotels, but mostly in the form of vacation rentals. Airbnb burst onto the scene a decade ago and persuaded millions of people around the world to open up their homes to strangers. That gave them a market foothold in major travel cities like Rome and New York. In the last few years, Booking and Expedia have stepped up their efforts to compete with Airbnb as short-term home and apartment rentals became the fastest-growing part of the industry.

“We’ve been pushing hard to add as many amazing homes and apartments to our platform as possible in order to guarantee that we’re providing the choice and diversity our customers crave,” Olivier Gremillon, vice president at Booking.com, said in a statement. “We’re definitely proud of this milestone.”

Airbnb, for its part, said it’s growing faster than Booking on the strength of its brand. Booking, which started in the Netherlands and is more widely known overseas, has increased marketing spending in the U.S. to win over customers who are more familiar with better-known brands like Expedia and Airbnb.

“Airbnb is growing faster and spending less because we have a community model as opposed to Booking’s commodity model,” an Airbnb spokesman said in an email.