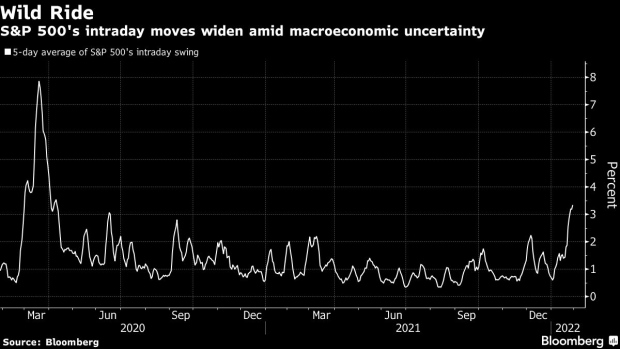 (Bloomberg) -- In another week of severe equity turbulence, the S&P 500 saw three of the biggest intraday reversals of the decade, Microsoft Corp. swung 15% in 15 hours, and stock volatility doubled.

In the end, for one last twist, the index rallied Friday, erasing losses for the week to post one of its smallest wire-to-wire moves in months.

It was the final irony for a week in which investors just couldn’t make up their minds, amid a panoply of warring narratives. On one side was Jerome Powell, suddenly the enemy, refusing to commit to keeping rate hikes gradual. On the other was the booming economy, promising to blot out the impact of anything the Federal Reserve might throw in its path.

Beneath it all was dwindling liquidity, the thinnest since the pandemic crisis, making every swing worse and sending traders to the options market for protection like never before.

After a decade of small and steady gains adding up to years and years of bumper returns, haywire swings have become the rule -- both up and down. It’s happening as investors struggle for a consensus on how to value stocks amid signals on monetary policy and the economy that are as murky as any time since 2008.

Over at investment bank KBW, two types of traders stood out to R.J. Grant, the director of equity trading. Those bailing in order to go bargain hunting later, and those who are just bailing.

“We’ve seen sellers who want to get less exposure in case things keep falling in the market, so then they can buy even lower,” Grant said. “Then there are investors who say to us, ‘This isn’t good! There’s going to be a recession!’”

Stocks narrowly avoided a fourth week of losses that would’ve been the longest since 2020. Thanks to a rate-induced selloff in richly valued growth stocks, the tech-heavy Nasdaq 100 has plunged more than 11% since the start of the year, on course for its worst month since October 2008.

Moves as big as that mask even more nerve-wrecking swings on an intraday basis. Helping exacerbate them is a deterioration in market liquidity, a measure of the ease with which traders can buy and sell stocks without having an outsize impact on prices. Liquidity levels tracked by JPMorgan Chase & Co. just hit the lowest since March 2020.

“When we have huge volume days and big, big swings, market makers are pulling back to avoid losing money. So there’s less liquidity,” Art Hogan, chief market strategist at National Securities, said by phone. “That’s one of the hallmarks of the volatility that we’re seeing because nobody wants to get caught on the wrong side in any of these swings.”

The wild market was best illustrated by the Nasdaq 100. On Monday, the index erased a loss of nearly 5%, the biggest turnaround since January 2001, as retail investors bought the dip and hedge funds unwound short positions. Then greed gave way to fear after the Fed’s policy meeting, with the measure almost giving up a gain of 3.5% on Wednesday and wiping out a 1.7% increase during the next session. It surged more than 3% Friday to end the week slightly higher.

The two-way volatility hit a fever pitch after Apple Inc. posted a record $123.9 billion in quarterly sales. Nasdaq 100 futures initially rallied, and then turned lower overnight. The cash index extended losses into Friday’s open, only to reverse again to close the session up the most since March 2021.

“I’m completely exhausted,” Emily Roland, co-chief investment strategist at John Hancock Investment Management, said on Bloomberg TV with Jonathan Ferro. “It’s been quite a week for the markets and it’s been a frustrating one for investors as well.”

The whiplash underlines all the disagreement: about earnings, the economy, the Fed, and even geopolitics, with Russia massing troops near Ukraine. While bulls urged investors to buy the dip, citing economic strength and a historic pattern where stocks tended to fare well in the first year of a tightening cycle, skeptics pointed to stretched valuations and a profit slowdown as reasons for caution.

Going by fund flows, investors have yet to capitulate. Equity funds took in $17.1 billion in the week through Wednesday, EPFR Global data compiled by Bank of America Corp. show.

However, trepidation is creeping up in the options market, with total put option trading surging to a record.

To Randy Frederick, managing director of trading and derivatives at the Schwab Center for Financial Research, the market is likely heading for a stage where volume will come down as traders wait for clarity.

“Everybody that wants to sell to take profits has done so, everybody who wants to put on hedges has probably already done so, and some of the bargain hunters have been out there nibbling around but they’re not doing it with enough conviction to push things higher,” he said. “So all three of those people are just going to sit on the sidelines and go ‘OK I’m not sure what’s going to happen here.’”

Violent reversals like this year’s, even the ones to the upside, historically tended to occur during market down cycles. Ned Davis Research studied instances where the S&P 500 or the Nasdaq 100 produced giant positive reversals, and found that seven of the top eight previous cases took place during cyclical bear markets.

In other words, market volatility is sounding alarms. To strategists including Ed Clissold, stocks need to stage a broad rally, or “breadth thrust,” to negate the ominous signal.

“Breadth thrust indicators provide higher conviction that a sustained rally is under way,” Clissold wrote in a note this week. “Another round of breadth thrusts would signal the cyclical bull has a new lease on life.”