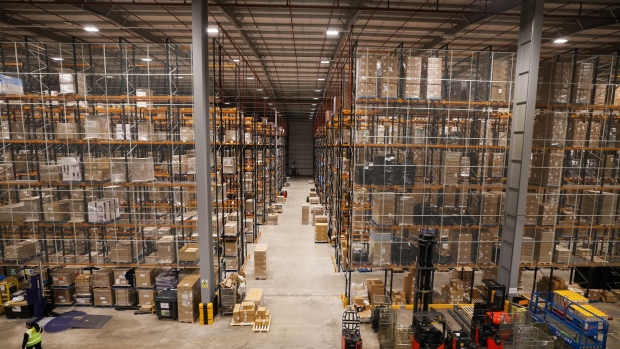 The astronomic growth in the value of UK warehouse properties is coming to a juddering halt as rising interest rates outweigh hefty rent hikes.

LondonMetric Property Plc, a landlord that transformed itself to capitalize on the boom in online shopping almost a decade ago, reported half year EPRA net assets per share that were 12.2% lower than the end of March. It signals the end of a dramatic period of growth in asset values for the company, which has tripled the size of its portfolio since its creation through a merger in 2013, thanks to its bet on warehouse demand.

“We continue to operate in a volatile environment with a number of challenges facing both the economy and the consumer,” LondonMetric Chief Executive Officer Andrew Jones said. “Sharp movements in both bond yields and interest rates have brought to an end the era of cheap money and is having a material impact on real estate valuations.”

A severe shortage of warehouse space in areas close to population centers has underpinned massive rental growth, helping drive warehouse values higher. Rents continue to rise but the impact of higher rents has been more than offset by the increased cost of borrowing that’s feeding into property valuations.

LondonMetric’s portfolio was valued at £3.5 billion at the end of September, down from £3.6 billion in March. That represents a slowdown from its previous financial year when the value of its portfolio jumped from £2.6 billion in 12 months. A 13.5% increase in net rental income in the six months through September helped cushion the blow to values from rising rates.

London & Stamford and Metric Property merged to create LondonMetric Property in a 2013 deal that combined residential, office, retail and distribution real estate. In the following years, the newly formed firm pivoted its holdings and significantly increased its exposure to warehouses. Distribution property now makes up almost 75% of its portfolio.