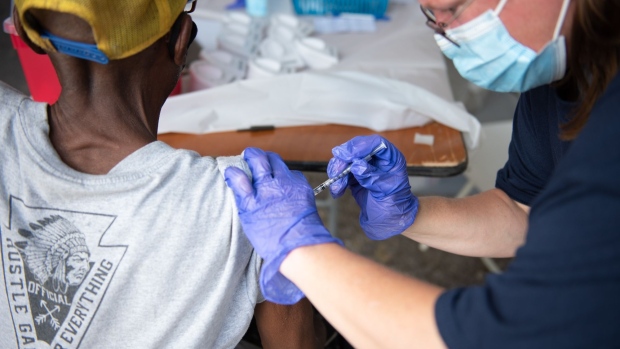 A healthcare worker administers a dose of the Pfizer-BioNTech Covid-19 vaccine during a vaccination event in Birmingham, Alabama, U.S., on Saturday, Aug. 28, 2021. Covid-19 hospitalization numbers and deaths continue to climb in Alabama as the state grapples with the most recent surge. Photographer: Andi Rice/Bloomberg , Bloomberg

(Bloomberg) -- President Joe Biden’s push to begin offering third doses of Pfizer Inc.’s coronavirus vaccine faces the first of two crucial tests Friday when advisers to the Food and Drug Administration meet to discuss whether booster shots should be offered to most Americans.

The meeting will take place as an extraordinary public debate plays out among administration officials, pharmaceutical executives, scientists, public health experts and global activists about whether boosters are even needed, and whether those doses would do more good being sent to poorer nations whose residents haven’t received even a single shot.

The White House’s plan to begin offering boosters to almost all vaccinated adults starting next week has raised concerns among health experts that the administration is rushing ahead without enough data and regulatory oversight. The announcement came without the FDA and Centers for Disease Control and Prevention publicly saying they had fully vetted giving a third shot to the 180 million fully vaccinated Americans by year-end.

“If the advisory committee votes not to support boosters, this will put the administration in an awkward position,” said Norman Baylor, former director of the FDA’s Office of Vaccines Research and Review and now chief executive officer of Biologics Consulting.

The agency isn’t obligated to follow the recommendations of the panel, called the Vaccines and Related Biological Products Advisory Committee, though it typically does. A decision on whether to authorize the supplemental shot could come soon after the meeting concludes on Friday.

Pfizer and its partner, BioNTech SE, will present data that suggest the efficacy of its Covid-19 vaccine wanes over time, and that a booster dose is safe and effective at warding off the virus and new variants. New data from Israel supports that premise. A third dose of the Pfizer vaccine can dramatically reduce rates of Covid-related illness in people 60 and older, according to a study in Israel released Wednesday by the New England Journal of Medicine.

But some scientists and even two top FDA officials have questioned evidence supporting the need for a third dose. Covid-19 vaccines work well and governments would be better served to focus on immunizing the unvaccinated, according to review published Monday in The Lancet authored by an all-star panel of scientists from around the world.

Among the scientists behind the Lancet article were Marion Gruber, who now leads the FDA’s vaccines review office, and her deputy, Philip Krause. Both have said they would step down later this year. Gruber and Krause were among a group of FDA staffers who last year pushed back against pressure by the Trump administration to speed up the authorization of Covid vaccines.

Global health leaders have also called for more equitable distribution of doses. Dozens of countries have such limited access to the vaccines that they have immunized less than 10% of their populations. World Health Organization Director-General Tedros Adhanom Ghebreyesus has called for a moratorium on boosters to enable poorer countries to catch up.

However, global vaccination coverage is outside the remit of the meeting, according to Baylor.

“I don’t think the consideration of global vaccination will impact the FDA’s ruling; however, global coverage may come up,” he said.

The second test for the Biden administration will come next week. A panel of outside experts who advise the CDC on how best to administer new vaccines will meet Sept. 22-23.

Friday’s meeting is also happening at a time when the FDA is without a permanent leader during a crucial period for big decisions, such as whether vaccines should be authorized for children under age 12.

Bloomberg News reported last month that he Biden administration has ruled out nominating Acting Commissioner Janet Woodcock as permanent head of the FDA, though the Nov. 15 deadline to name a Woodcock successor is looming.

The outcome of the booster decisions is critical for Pfizer, as it will shape the long-term marketplace for what’s become the biggest-selling drug in the world. Pfizer said in July it expects its vaccine to generate $33.5 billion in revenue this year, putting it on course to become one of the best-selling medicines of all time.

The same goes for Moderna Inc., whose vaccine uses similar mRNA technology. Moderna joined the S&P 500 earlier this year when its value nearly tripled. The biotech company is also seeking clearance for a booster dose.

“A third shot is likely, both for Pfizer and Moderna vaccination, and that should continue to support very high sales we would project through 2023,” said Damien Conover, senior equity analyst at Morningstar Inc. who added that he’s still working through the data. “We are less convinced there’d be a need for annual. Sales fall dramatically post-2023.”

Monica Gandhi, an expert in infectious disease at the University of California, San Francisco, said Covid boosters may be needed only once every 10 years. But the question of how effective they will be at protecting against variants remains uncertain without more randomized controlled data, she said.

The concern is that with global vaccine inequity, variants more virulent than the current delta strain could emerge in vulernable populations.

“I hope we can’t get a variant more transmissible than this,” Gandhi said. “But it is possible.”