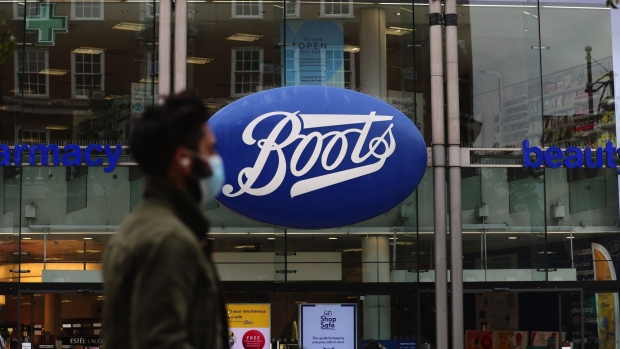 A pedestrian wearing a protective face mask passes a Boots pharmacists, operated by Walgreens Boots Alliance Inc., on Oxford Street in London, U.K., on Thursday, July 9, 2020. British shops aren't getting much of a boost from newly reopened bars, cafes and restaurants as customers prefer to stay away. Photographer: Simon Dawson/Bloomberg , Bloomberg

(Bloomberg) -- The imploded sale of Boots is just the latest chapter in the UK drugstore chain’s long battle to compete on main streets up and down the country, but it may be the most challenging one yet.

The 173-year-old retailer will stay under the ownership of Walgreens Boots Alliance Inc., at least for now, after the US health-care group decided to abandon the sale Tuesday. Faced with the worst cost-of-living crisis in Britain in decades and an ambivalent parent company whose main focus is the core North American business, Boots and its Chief Executive Officer Sebastian James are going to have to fight hard to vie for customers.

“For Boots the collapse of the disposal cannot be considered great news,” said Clive Black, head of research at Shore Capital. “Walgreens wants out. Meanwhile, Boots has a need for its stores to be recapitalized, a credible online capability evolved, staff to be energized and an estate to be managed.”

Since starting out as a herbalist store in Nottingham in 1849, Boots has grown to be a household name. It runs one of the largest store estates in the UK with more than 2,000 outlets and has developed a suite of private label beauty brands, such as the successful No7 Beauty Company. It also has smaller operations in Ireland, Norway, the Netherlands and Thailand, as well as an optician business.

Walgreens said it will continue to invest in Boots and the No7 brand and stay focused on their further growth and profitability. Shares in Walgreens closed down nearly 3% on Tuesday. The stock is down more than 21% since the start of the year.

Not everyone agrees. Many large Boots stores need to be renovated and adapted to changing consumer trends as they face fierce competition from rival Superdrug, owned by AS Watson & Co Ltd. The pharmacy business is battling pricing pressure as the National Health Service, Britain’s state-run health-care system, reins in reimbursement for prescribed drugs.

While Boots has invested hundreds of millions of pounds in its warehouses and technology to support online sales, it’s still considered digitally behind some online-only beauty rivals. The chain has also had to make moves to become more competitive recently, freezing prices of key lines as consumers grapple with rising energy, food and fuel bills.

The most recent figures from Walgreens showed Boots improving -- and there could be fresh evidence of further progress when the latest quarterly numbers are released Thursday -- but it’s going to be a long haul. James, a veteran UK retailer who previously ran Dixons Carphone, now has the job of trying to steer Boots through this tricky period.

In-stock levels and the general state of the stores at Boots has been poor for a while, according to Tony Shiret, an analyst at Panmure Gordon. However, the more significant challenge facing James is “probably a draining effect on morale and a lack of obvious direction,” he said.

Shiret expects Walgreens to wait until markets are taking a more positive view of consumer businesses and then to try again to sell Boots. Others suggest that Walgreens won’t attempt a sale again soon after it not only failed to find a buyer, but only attracted bids at a far lower price than Stefano Pessina, Walgreens’ executive chairman who led the process, wanted.

Pessina has a long history with Boots that dates back to 2006 when he merged the chain with his Alliance UniChem business, before taking it private with KKR & Co. and then selling it to Walgreens in two transactions in 2012 and 2014.

A partial listing of Boots chain might be the most realistic option in the future rather than a sale, although that could be a ways off given the torrid time Europe’s consumer sector is having. Europe’s retail index is down 35% year-to-date, the worst performing industry by far. The MSCI World Retailing Index, which includes the likes of Target Corp., Zalando SE and Amazon.com Inc., is down 30% in 2022, its first negative year since 2008.

If You Thought the Tech Rout Was Bad, Spare a Dime for Retailers

Whether Boots receives the support needed from Walgreens to keep key staff and positively evolve, remains to be seen, Black said. “However, a click of the fingers cannot improve performance, the market conditions are deteriorating, and the competition is strong,” he said.