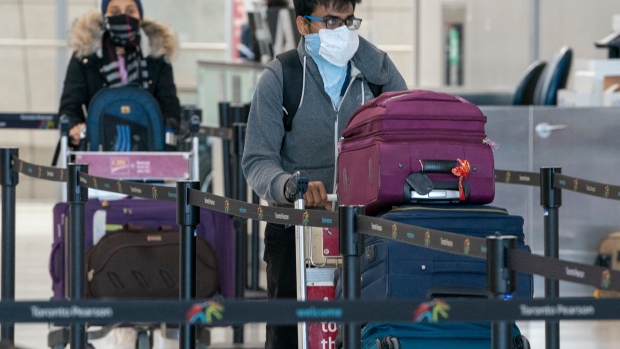 Passengers wear masks as they arrive for their flight at Pearson Airport in Toronto on Friday, March 13, 2020. , The Canadian Press

Automated questionnaires administered by touchscreens at entry points will now ask anyone and everyone who is arriving from overseas whether they have coughs, difficulty breathing or are feeling feverish, the CBSA said on Twitter. New arrivals will also be required to acknowledge that they're being asked to self-isolate for two weeks to keep COVID-19 from spreading.

The questions come as provinces and municipalities are stepping up their own efforts at local airports.

The city of Montreal and its regional public health authority are deploying dozens of employees to Pierre Elliott Trudeau International Airport to ensure anyone entering Canada understands the importance of proper health precautions.

Alberta Premier Jason Kenney also said Sunday that he was directing provincial officials to check up on airports in the province after he visited Edmonton International Airport to investigate reports of inadequate screening of international travellers.

The union representing Canada's border officers was also set to meet with the CBSA on Monday after raising concerns last week about a lack of information and guidance to its members, one of whom has tested positive for COVID-19.

There were 324 confirmed cases of COVID-19 in Canada as of Monday morning and another 17 probable cases. One person has died of the respiratory illness.