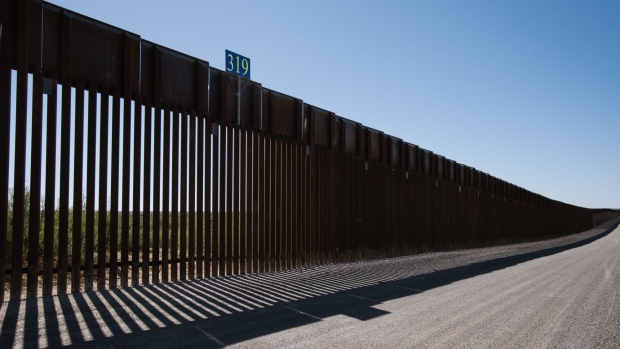 A section of the U.S. and Mexico border wall stands in Santa Teresa, New Mexico, U.S., on Monday, Oct. 21, 2019. House Homeland Security Chairman Bennie Thompson urged in a letter to the Defense Department's inspector general for an investigation of a $400 million contract to build border infrastructure in Yuma County, Arizona. , Bloomberg

(Bloomberg) -- The U.S. Senate rejected an amendment to a broad $550 billion infrastructure package that would have barred the Biden administration from canceling contracts related to former President Donald Trump’s border wall, as the Senate plowed through proposed changes with the vast bipartisan plan intact and just days away from passage.

The vote on the amendment proposed by GOP Senator Ron Johnson of Wisconsin defeated one of the few controversial proposed changes to the bill, keeping the broader legislation on track for a vote as soon as this weekend. It was blocked in a 48-49 vote that was well short of the 60 needed for inclusion.

Senate Majority Leader Chuck Schumer announced Wednesday morning that there would be more votes on amendments. The Senate’s second-ranking Republican, John Thune, told reporters that GOP senators will decide during a lunch meeting how much longer to insist the debate continue. It will take 60 votes to limit debate and move toward final passage, and some Republican backing will be needed in the 50-50 Senate.

The bill was negotiated over many weeks of talks between the White House and a bipartisan group of senators led by Republican Senator Rob Portman of Ohio and Democratic Senator Kyrsten Sinema of Arizona. It includes about $110 billion in new spending for roads and bridges, $73 billion for electric grid upgrades, $66 billion for rail and Amtrak, and $65 billion for broadband expansion. It also provides $55 billion for clean drinking water and $39 billion for transit.

Johnson’s amendment would have prohibited ending any contracts for border barriers or security measures that already have funds obligated -- language with a clear eye toward Trump’s controversial wall that splintered lawmakers throughout his presidency.

So far, the Senate has agreed to only modest, bipartisan changes to the legislation, a sign its pathway is being cleared in a chamber that has been marked by acrimony over other issues this year that include voting rights and the creation of a commission to probe the January 6 insurrection at the Capitol.

In one possible amendment of note, a bipartisan group of senators has drafted a proposal that would revise a requirement in the bill for cryptocurrency businesses, including miners and software developers, to report data to the Internal Revenue Service. The cryptocurrency industry has said this measure is overly broad and would require some companies to report data they don’t have access to.

Senate Finance Chairman Ron Wyden, a Democrat, and Republican Senators Pat Toomey of Pennsylvania and Cynthia Lummis of Wyoming, worked on the more targeted proposal that they say factors in the nuances of the emerging technology. Like all other amendments proposed to the bill, a 60-vote super-majority would be required for it to succeed.

Once the Senate completes work on the infrastructure bill, Schumer has said the Senate would immediately turn to a budget resolution setting up a fast-track procedure known as reconciliation that could allow Democrats to pass the bulk of President Joe Biden’s economic agenda without facing a filibuster by Republicans. A planned $3.5 trillion package would address policy areas including climate change, immigration, taxes, health care and child care, and it faces significant hurdles in both the Senate and House.