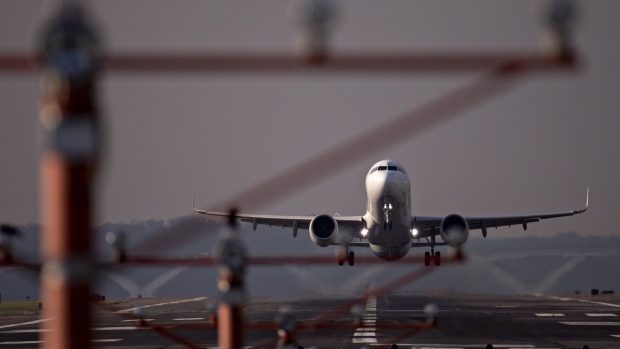 The U.S. Global Jets exchange-traded fund, ticker JETS, posted its 64th consecutive day of inflows on Tuesday, according to data compiled by Bloomberg. Its growth has been staggering: The ETF held just US$33 million in early March as the coronavirus pandemic grounded global air travel. The fund’s top holdings are the four major U.S. airlines, though it said last week that it will begin investing in Canadian carriers as well.

Much of that explosive growth in assets can be credited to day traders looking to “catch the bottom” in airline stocks, according to Frank Holmes, chief executive officer of JETS issuer U.S. Global Investors. After speaking with newly minted JETS holders, he says the boredom of being stuck at home and the strong rebound in carriers after the 2001 terrorist attacks and the 2008 financial crisis are luring young traders.

“All these millennials, being stuck at home with no bars to go to and no beaches to travel to, took their money and became day traders,” said Holmes. “They’re bored, they want to make money.”

In particular, the growing popularity of JETS on retail trading platform Robinhood has “shocked” Holmes. The number of users holding JETS surged to nearly 30,000 this week, according to Robintrack, a website unaffiliated with the site that uses its data to show trends in positioning. That compares to 500 at the beginning of March.

Not even a warning from billionaire investor Warren Buffett has deterred the army of day traders. Buffett said in early May that Berkshire Hathaway Inc. completely exited its positions in airlines, cautioning that the prospects have changed as a result of the coronavirus outbreak. Since then, JETS has taken in roughly US$294 million worth of inflows.

Despite a nearly 21 per cent rebound over the past month, JETS still nursing a year-to-date plunge of over 45 per cent, compared to the S&P 500’s 2.8% 2020 drop. The bulk of the fund’s losses came after mid-February once lockdown measures took effect around the globe in an effort to contain the spread of infections.

JETS’s recent recovery has further evaporated demand to bet against it. Short interest as a percentage of shares outstanding on JETS -- a rough indicator of bearish bets on the fund -- is currently 0.5 per cent, according to data from IHS Markit Ltd. It reached 7.8 per cent in February 2019.

However, JETS’s methodology deserves a second look from investors pouring into the fund, according to DataTrek Research.

Instead of using a market-cap based weighting system employed by most sector-focused ETFs, JETS seeks to assign a 10 per cent weighting to the top four largest U.S. or Canadian airline companies. Additionally, the fund doesn’t have Boeing, despite holding General Dynamics and Airbus, co-founder Nicholas Colas noted.

“JETS may work from here, or it may not, but the important thing to know is that it’s not a passive fund with weightings based on market caps and it can entirely exclude mega-cap companies associated with air travel,” Colas wrote in a note Tuesday. “While the whole airline group may trade with a correlation of 1.0 for some time to come, you can’t just assume you know what’s in this product.”