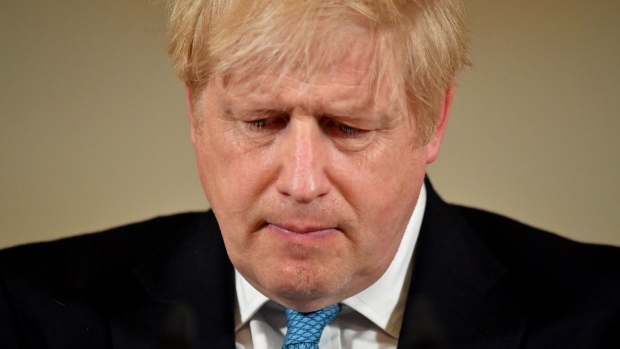 British Prime Minister Boris Johnson was admitted to hospital for tests on Sunday as a precaution, after struggling to recover quickly from the coronavirus infection he contracted 10 days ago.

Johnson, 55, felt unwell on March 26 and took a test for the virus, which confirmed he had the illness. The following day he announced he was in isolation, and has been unable to shake off the symptoms -- including a high temperature -- since.

“On the advice of his doctor, the prime minister has tonight been admitted to hospital for tests,” a spokesperson for Johnson’s office said. “This is a precautionary step, as the prime minister continues to have persistent symptoms of coronavirus ten days after testing positive for the virus.”

He remains in charge of the government, and is in contact with ministerial colleagues and officials. If Johnson were to be unable to carry out his duties, First Secretary of State Dominic Raab, who is also foreign secretary, would take over.

Johnson ordered a national lockdown on March 23 and has been shut away in his Downing Street apartment, in accordance with his own government’s guidelines. Officials have been bringing him his paperwork and meals and leaving them at his door.

Johnson’s fiancee Carrie Symonds, who is pregnant, has also been self isolating with symptoms of the virus for the past week.

--With assistance from James Ludden.