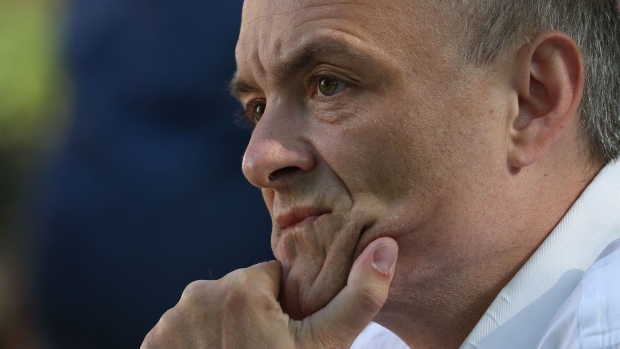 LONDON, ENGLAND - MAY 25: Chief Advisor to Prime Minister Boris Johnson, Dominic Cummings makes a statement inside 10 Downing Street on May 25, 2020 in London, England. On March 31st 2020 Downing Street confirmed to journalists that Dominic Cummings was self-isolating with COVID-19 symptoms at his home in North London. Durham police have confirmed that he was actually hundreds of miles away at his parent's house in the city. (Photo by Jonathan Brady-WPA Pool/Getty Images) , Photographer: WPA Pool/Getty Images Europe

(Bloomberg) -- Shortly after 3:30 p.m. on Jan. 7, Dominic Cummings pressed the trigger on the latest tirade against his former boss, Boris Johnson.

Since being forced acrimoniously from his post as the U.K. prime minister’s most powerful adviser 14 months ago, Cummings has repeatedly resurfaced to throw dirt at Johnson and his British government. This time it was a zinger.

In May 2020, a senior official in Johnson’s office had invited staff to a pandemic rule-breaking drinks party in the garden of the premier’s official residence and workplace at 10 Downing Street, Cummings wrote in his blog. Sue Gray, the senior civil servant investigating allegations of other illicit gatherings, should be able to dig up email proof, he said.

Three months after Johnson's allies talked of a decade in power after a triumphant party conference, Cummings's post left the prime minister fighting to save his career.

It only took until Monday, three days after the salvo from Cummings, for ITV to track down and publish the incriminating email from Johnson’s principal private secretary, Martin Reynolds, inviting about 100 staffers to “bring your own booze” to “socially distanced drinks.”

By Wednesday,  Johnson was delivering a humbling apology to the House of Commons, in which he acknowledged attending and said he thought it was a “work” event. The gathering has been added to the scope of Gray’s probe, which may conclude as soon as next week.

When Johnson looks back at his worst week in politics, the influence of 50-year-old Cummings looms large. He’s  been scathing about his former boss’s handling of the pandemic, likening the premier to an out-of-control shopping trolley. He’s also written about how the premier planned to have secret donors pay for renovations to his flat. Days later, the Electoral Commission opened a probe into the matter that concluded last month with a fine to the ruling Conservative Party.

To be sure, Cummings himself has been a controversial figure in British politics who has been tainted by allegations of Covid rule-breaking himself.

Regardless, the worry for Johnson is that his former aide isn’t done. Having been inside the premier’s top team at the height of the pandemic, Cummings had a front-row view of events during the crucial months now under scrutiny for alleged rule-breaking in the heart of government. Further evidence implicating Johnson — photos, emails or documents — could be terminal for the 57-year-old premier’s tenure.

“He is on a campaign to prove that Boris Johnson isn’t fit to be prime minister,” said Polly Mackenzie, chief executive of Demos, a think-tank. “He’s clearly acting out of a certain kind of retribution.”

Whether Cummings has further ammunition on Johnson is a major worry, said one Conservative MP, speaking on condition of anonymity. Another Tory who worked closely with Cummings, said he has a keen interest in nuclear warfare, and he knows that simply the threat of having a weapon is enough to exert influence.

Slumping in the polls and with a majority of Britons saying he should resign, Johnson is now at his weakest and is bracing for the results of Gray’s investigation. There has been a steady stream of revelations about parties in Downing Street that appeared to break the rules, with little sign of it stopping. The probe was widened on Friday to include fresh allegations in the Daily Telegraph about two parties in Number 10 on April 16, 2021, the eve of Prince Philip’s funeral. Johnson’s office said it had apologized to Queen Elizabeth II over the matter.

But Johnson's spokesman, Jamie Davies, declined to answer when asked if there would be further revelations about parties.

If Gray uncovers evidence of criminality, the police too could get involved.

Johnson’s fate as prime minister lies in the hands of his backbench Conservative MPs, 15% of whom — 54 MPs — can trigger a vote on his leadership by submitting letters of no confidence. A handful of MPs in his party have publicly called for him to resign already, and privately anger is simmering. Many say they will make up their minds once they’ve seen Gray’s findings.

Perhaps most worryingly, Johnson himself couldn’t guarantee in a call this week with Scottish Conservatives leader Douglas Ross that there won’t be further damaging revelations, according to the Times newspaper. Ross subsequently called for him to quit.

Cummings is best-known for masterminding victory in the Brexit campaign. But he also has form in apparent transgressions of Coronavirus regulations, driving his family 250 miles to Durham, northeast England, when people were required to stay at home. That provoked a significant crisis for Johnson, culminating in Cummings issuing an apology at a press conference in the Downing Street garden.

He’s also featured in a photo of one of the gatherings under investigation. Published by the Guardian, it shows him in the Downing Street garden next to Johnson and Reynolds. In his Jan. 7 blog, he denied it was a party, saying outdoor work meetings were encouraged, because the virus was less transmissible outdoors.

After leaving government, Cummings gave a withering near-seven-hour testimony to a Parliamentary committee, calling Johnson “unfit” to be prime minister and accusing him of disastrous decisions that meant “tens of thousands of people died who didn’t need to die.”

In his numerous posts since then, he’s excoriated Johnson’s leadership and is frequently critical of the premier’s wife, Carrie, arguing she has an excessive influence and has maneuvered her allies into top positions.

But Cummings isn’t the only person capable of damaging Johnson further, Demos’s Mackenzie said. If Johnson were to seek to create scapegoats of more junior officials in Downing Street to save himself, that could backfire, she said.

“Dominic might be a catalyst here, but a big clear-out of a bunch of people being punished may in fact worsen the problem,” she said. “There are too many people who know too many things.”