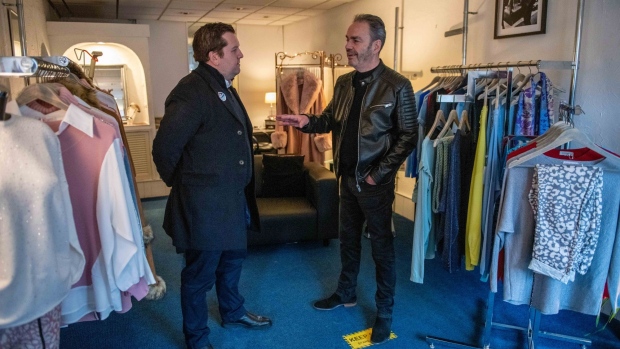 (Bloomberg) -- Boris Johnson is in uncharted territory. The serial election winner who rode that reputation to the top job in British politics is battling to prove to members of his ruling Conservative Party he should keep it.

After a bruising month of Tory rebellions, a row over lobbying and ethics, and squabbling top officials — all against a backdrop of an ugly political spat with the U.K.’s nearest neighbor — even a prime minister known for his erratic behavior and embrace of chaos has realized his leadership needs urgent repair.

Johnson has been hosting weekly drinks and canapes for Tory MPs, divided into groups according to the years they entered Parliament, to try to soothe nerves. According to one person who attended, he is making a point to speak to each MP individually to show he’s listening to their concerns.

He’s also organizing a two-day party gathering at a countryside retreat in early January, the first such event under Johnson but one that will emulate his predecessors including David Cameron and Theresa May.

May herself offered a reminder to Johnson of the dangers faced by Tory leaders when she joked at an awards ceremony this week about her own defenestration, which came following a meeting with Graham Brady, head of the influential 1922 committee representing rank-and-file Tory MPs.

On Thursday, Brady and the committee’s executive had what one attendee described as an honest discussion with Johnson about recent difficulties in Downing Street.

The deaths of 27 people trying to reach Britain from northern France this week has added to the sense of crisis surrounding Johnson’s government, with Tory MPs demanding action to fix the migration issue which  they see as a high priority among voters. On Friday, news of a new Covid variant raised the prospect of a return to pandemic restrictions — a move that would be politically perilous for Johnson.

Johnson had been struggling to ease MPs’ concerns about his performance even before the latest crises. After a last-minute change to flagship social care legislation triggered a major Tory rebellion in Parliament this month, one former minister told Bloomberg that Johnson has no one making sure that what his government is doing makes sense.

It was an example of what some Tories see as Johnson’s tendency to squander political capital by over-promising and under-delivering, such as when his watered down plans for new railways in northern England disappointed voters — despite still costing close to 100 billion pounds ($133 billion).

“This is the danger in selling perpetual sunlight, and then leaving it to others to explain the arrival of moonlight,” said Tory MP Huw Merriman.

Yet their biggest fear — even though the next general election is only due by 2024 — is that voters who previously overlooked Johnson’s gaffes and missteps may finally be shifting their view. The prime minister’s approval rating has plummeted, while the Tories are now running neck-and-neck with Keir Starmer’s opposition Labour Party in many polls.

“The overriding reason that Conservative MPs and Conservative members have got behind Boris Johnson is they believe he is an election winner,” Jane Green, professor of British politics at Oxford University, said in an interview. “If that turns out not to be true then I think their support will very quickly diminish.”

On that basis, upcoming elections for two parliamentary seats have come at an awkward time. Johnson knows the easing of pandemic restrictions has swung the focus to his non-Covid policies and handling of the economy, perhaps for the first time since his general election victory in late 2019.

On the streets of Old Bexley and Sidcup, an affluent outer London borough that votes on Thursday, even some Tory supporters don’t like what they’re seeing.

“We’ve probably got the worst government in my living memory,” said David Greenberg, 60, co-owner of Chex, a women’s fashion boutique on Bexley high street, and a life-long Tory voter.

On paper, Old Bexley and Sidcup looks an easy hold. Former minister James Brokenshire, whose death this year triggered the election, had a majority of almost 19,000 in 2019. Former Conservative Prime Minister Edward Heath’s district has voted Tory ever since it was formed in 1983.

Amid the turmoil, though, Johnson’s party is taking nothing for granted. The premier has campaigned in the district, as has Chancellor of the Exchequer Rishi Sunak. Home Secretary Priti Patel, who faces intense pressure to fix the migrant crisis that has soured relations with France, has also visited.

Other MPs received WhatsApp messages from deputy chief whip Stuart Andrew asking them to campaign in the seat.

The fear is that Johnson’s recent missteps, including his rambling and haphazard speech to Britain’s business lobby with its references to Moses and Peppa Pig, may be cutting through with voters.

“They’re flapping,” said Greenberg of the high-profile visits. “We’ve got a pandemic here, we’ve got the problem with the immigrants coming over and losing their lives. It’s dreadful,” he added. “There’s so many important things to talk about, and he’s talking about Peppa Pig. Really?”

In reality, few expect anything but a comfortable Tory win in Old Bexley. According to the Conservative candidate Louie French, voters do not consider Johnson’s recent troubles as a local issue.

“People know it’s got nothing to do with me,” said French, who has pledged to give up his job as a sustainable portfolio manager for Tilney Asset Management if he’s elected, after initially being non-committal.

The pressures on Johnson will remain, though, from surging consumer prices to the collapse of energy firms and the potential resurgence of the pandemic. An ongoing Brexit dispute with the European Union could yet end in a trade war.

What Is Article 16 and Why’s It Reviving Brexit Wars?: QuickTake

The perception Johnson has lost his grip on the economy will be the moment people “start to see that maybe Labour has a shot” at the next general election, said Chris Curtis, senior research manager at polling company Opinium. “There’s increasingly a view among the public that he’s basically not competent enough to run the country.”

After Thursday’s vote, the Tories face another vote in Owen Paterson’s former North Shropshire district, which will reignite headlines about ethics and corruption that was the initial spark for the current crisis facing Johnson.

Meanwhile an old threat to Johnson’s Tories may be re-emerging. Former Brexit Party leader Nigel Farage, who has been calling for months for the U.K. to turn back small boats carrying people across the Channel from France, has said he is considering another political comeback.

Yet even with all the unrest, there’s no sign the Tories will push for an imminent change of leader. Some MPs hope Parliament’s Christmas break will allow tensions to ease, and that Johnson will be back on form in the New Year.

Back in Old Bexley, Greenberg — whose mother worked on former Tory leader Heath’s campaigns — predicted some more awkward questions for Johnson before that, even with an expected Tory win on Thursday.

“The majority may be reduced greatly,” he said. “It may be the kick in the bum that they need.”