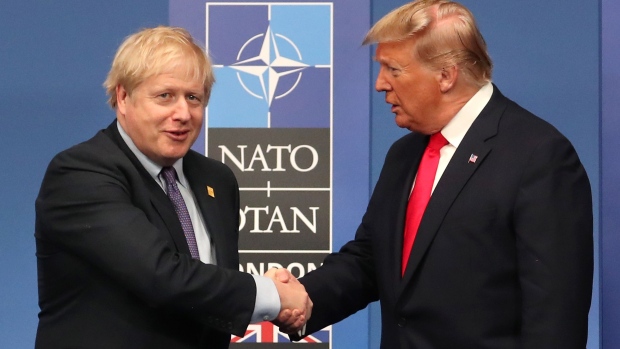 HERTFORD, ENGLAND - DECEMBER 04: British Prime Minister Boris Johnson shakes hands with US President Donald Trump onstage during the annual NATO heads of government summit on December 4, 2019 in Watford, England. France and the UK signed the Treaty of Dunkirk in 1947 in the aftermath of WW2 cementing a mutual alliance in the event of an attack by Germany or the Soviet Union. The Benelux countries joined the Treaty and in April 1949 expanded further to include North America and Canada followed by Portugal, Italy, Norway, Denmark and Iceland. This new military alliance became the North Atlantic Treaty Organisation (NATO). The organisation grew with Greece and Turkey becoming members and a re-armed West Germany was permitted in 1955. This encouraged the creation of the Soviet-led Warsaw Pact delineating the two sides of the Cold War. This year marks the 70th anniversary of NATO. (Photo by Steve Parsons-WPA Pool/Getty Images) , Photographer: WPA Pool/Getty Images Europe

(Bloomberg Opinion) -- In all those long months of Brexit negotiations and debate, Europe and the U.K. generally agreed on one thing: Their security partnership was too important to be dragged into the maw of Brexit politics. The U.S. assassination of Iranian commander Qassem Soleimani, and the threat of “nightmare” retaliations from Tehran, will test both that principle and the limits of Prime Minister Boris Johnson’s relationship with President Donald Trump.

According to Foreign Secretary Dominic Raab, the U.K. learned of the drone killing at the same time as the rest of us. Whatever was said when Johnson finally spoke with Trump in the aftermath, you can bet it didn’t resemble Ronald Reagan’s conversation with Margaret Thatcher in 1983 after the U.S. invaded Grenada, a Commonwealth country.

When Reagan sheepishly called the prime minister to explain why she wasn’t given advance warning, he opened the conversation with his trademark charm: “If I were there Margaret, I would throw my hat in the door before I came in.” Thatcher listened, a little icily, as Reagan went on: “I’m sorry for any embarrassment we caused you, but please understand it was just our fear of our own weakness over here with regard to secrecy.”

He was also thinking, he assured her, of the broader goal of building democracy after the military action; he didn’t want the “taint of big, old Uncle Sam trying to impose a government.” Thatcher ended the call, reminding him that she had to face a “tricky” Parliament debate. “Go get ‘em. Eat ‘em alive,” were Reagan’s words of encouragement.

We live in very different times. The targeted killing of a major Iranian figure on Iraqi soil is quite unlike the invasion of a small Commonwealth outpost. Certainly, Trump and Johnson aren’t bound together as their predecessors were at the height of the Cold War.

Yet Britain has lost blood and treasure fighting wars with America in the Middle East and has assets and people there who are at risk. It might have been offered a little notice, especially given the potential for escalation and the fact that in any wider conflagration the U.S. would expect, and even depend on, British support.

Johnson’s cautious response to the Soleimani assassination speaks volumes about Britain’s room for maneuver and its changing ties to both Europe and the U.S. After an initial silence, he issued two statements. The first, on his own, said Britain wouldn’t lament the Iranian’s demise, but called for a “de-escalation from all sides.”

A separate statement, together with French President Emmanuel Macron and German Chancellor Angela Merkel, didn’t even mention the killing, but urged Iran to “reverse all measures inconsistent with” the 2015 Iran nuclear deal and called on Iraq to continue to cooperate in the war against Islamic State.

Britain has walked a fine line on Iran, where it has diplomatic ties and a long and complex historical relationship. It has tried to balance constructive engagement (Europe’s priority) with strict containment (Trump’s imperative). That sort of stance works okay — but only if things don’t escalate. As my colleague Bobby Ghosh wrote Monday, it’s unclear whether Iran will respond rationally. If it attacks U.S. or allied interests, the U.K. will be expected to join the response.

“The problem for the U.K. now is that it doesn’t want to be isolated,” says Ian Bond, a former British diplomat who’s director of foreign policy at the Centre for European Reform. “In economic terms, Boris Johnson is looking for a quick something that he can announce on trade with Trump, even if it would be meaningless and there will be a lot of problematic areas. If he offends Trump he’s less likely to get it.”

That’s a precarious place to be, as I noted when Iranian Revolutionary Guard troops seized a U.K.-flagged tanker last year. The U.K. had been vocal in opposing the Trump decision to pull out of the Iran nuclear deal, known officially as the Joint Comprehensive Plan of Action. When the tanker got into trouble, U.S. Secretary of State Mike Pompeo told Britain it was on its own.

It is not the British way to chastise its closest ally publicly over a foreign policy disagreement, though Downing Street did issue a swift rebuff to Trump’s astonishing idea that Iranian cultural sites might be targeted. That gets to the rub of the dilemma for Britain: What happens if Trump wants it to follow where it doesn’t want to go?

Jack Watling, a research fellow at the Royal United Services Institute, says Britain’s balancing act is sustainable “until you get into that sort of scenario when Iranian retaliation is forcing escalation and at that point you have to decide.”

If Britain did join military action, “all of those operations would be coordinated through a combined war room, and in that context the targeting process would be integrated,” Watling notes. The U.K., however, has a different relationship with Iran and Iraq than its U.S. ally, and a much lower tolerance of collateral damage, as it showed during military action in Iraq and Syria.

Were it to follow Trump, there would be inevitable trans-Atlantic tensions, especially given France and Germany’s long-standing preference for engaging with Iran diplomatically. It’s a tension Iran is certainly aware of as well.

“Johnson will do his best to ride two horses,” says the CER’s Bond. “He won’t want to irritate the Americans. But equally, on the substance, he is closer to the European center of gravity than he is to Donald Trump’s view.”

The broader question, as Watling notes in a blog post for RUSI — and the decisive one for Britain’s place in the world — is whether the U.K.’s historic insistence on a rules-based international order can withstand pressure from Washington; and how much damage will be done to Britain’s ties with France and Germany at a delicate moment.

Post-Brexit trade talks will present London with plenty of difficult choices between the Americans and the Europeans. Johnson will hope that an Iranian escalation doesn’t do the same.