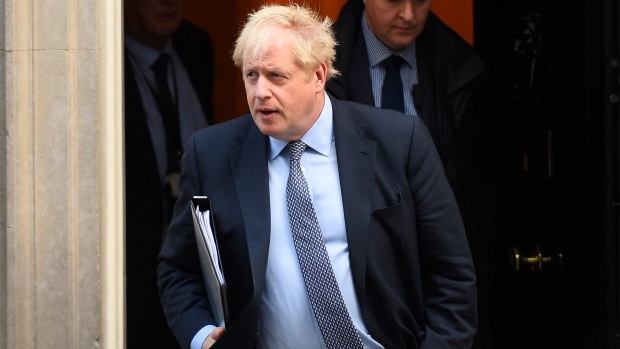 (Bloomberg) -- Prime Minister Boris Johnson will find out Tuesday evening whether he has any chance of getting his Brexit deal through Parliament -- and whether he can do it ahead of his Oct. 31 deadline.

Having twice been denied a vote on whether members of Parliament support his deal, Johnson has introduced the Withdrawal Agreement Bill, which would implement the deal in law, and plans to push it through Parliament at a breakneck pace. His moment of truth will come at around 7 p.m. in London, with what’s known as the Second Reading vote -- on whether Parliament agrees with the general principles of the bill.

An analysis of MPs’ previous votes and statements suggests Johnson probably has just about enough support to win that vote. But it will be immediately followed by a second, on whether MPs agree to his rapid timetable for pushing the bill through. If he doesn’t pass that hurdle, he could still deliver Brexit, but he has little chance of doing it on time.

“The public doesn’t want any more delays, neither do other European leaders and neither do I,” Johnson said in an emailed statement. “Let’s get Brexit done on Oct. 31 and move on.”

Still trying to meet that deadline, Johnson has proposed an express timetable for passing the Withdrawal Agreement Bill. It sparked an immediate backlash in the Commons, with MPs attacking the the government for attempting to “ram through” the bill.

The bill will then go to the House of Lords, Parliament’s upper chamber.

Losing the Second Reading vote would kill the bill. Losing the subsequent Program Motion, which sets the timetable for the rest of debate, would simply make it very hard to hit his deadline.

Defeat on either vote would be a blow for the prime minister, but would feed his public narrative that Parliament is trying to frustrate Brexit. Some of his actions in recent weeks have looked like efforts to pick fights. On Monday, he attempted to repeat the same vote he’d held Saturday, something that Speaker of the House of Commons John Bercow predictably ruled to be out of order. “We’re disappointed that the Speaker has yet again denied us the chance to deliver on the will of the British people,” Johnson’s spokesman, James Slack, told reporters in London.

If Britain’s departure from the European Union is delayed, and Johnson gets to call the election he has been pushing for, his slogan will be: “Get Brexit done.”

Johnson was forced Oct. 19 to request a three-month delay to Brexit from the EU. If that’s granted, it will be a significant defeat for a man who promised to get Britain out by Oct. 31 “do or die.” But he was clear on Saturday that he would blame this on MPs for standing in his way, rather than accepting that his plans had been unrealistic.

Around 8 p.m. on Monday, the government published the 110-page Withdrawal Agreement Bill, along with 125 pages of explanatory notes. Many MPs immediately complained that three days was far too little time to scrutinize it.

“This government proposal is frankly outrageous given the length and complexity of this bill,” Green Party MP Caroline Lucas said. Former Conservative Chancellor Ken Clarke also attacked the timetable, saying there was no way the government could expect Parliament to scrutinize the exit agreement in three days.

Northern Ireland’s Democratic Unionist Party, who were supporting Johnson’s plans until he went back on his promise not to allow a customs border between Britain and Northern Ireland, could be tempted to back a move that would delay Brexit. Their opposition helped to defeat him Saturday.

They will be further outraged by an admission from ministers that under their plan, goods leaving Northern Ireland for Britain will require “exit summary declarations,” even though they’ll be staying inside the U.K.. Michael Gove, minister in charge of Brexit planning, pledged the paperwork would be “seamless.”

Another measure that seemed likely to provoke opposition was a clause forbidding the government from negotiating a closer relations with the EU than the loose free-trade agreement that Johnson proposed on Oct. 17. If he does want to pass the bill, Johnson needs the support of MPs from the opposition Labour Party, and moves like that make it harder for them to back him.

Wednesday is likely to see opposition parties try to re-write the bill to force the U.K. to stay in the EU’s customs union, or to make the Brexit deal conditional on approval from the public in another referendum.

To contact the editors responsible for this story: Flavia Krause-Jackson at fjackson@bloomberg.net, ;Tim Ross at tross54@bloomberg.net, Stuart Biggs, Tony Halpin