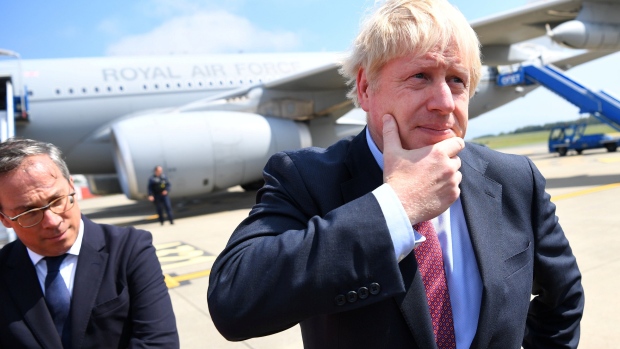 BIARRITZ, FRANCE - AUGUST 24: British Prime Minister Boris Johnson disembarks a plane as he arrives as Biarritz Pays Basque Airport for the G7 summit on August 24, 2019 in Biarritz, France. The French southwestern seaside resort of Biarritz is hosting the 45th G7 summit from August 24 to 26. High on the agenda will be the climate emergency, the US-China trade war, Britain's departure from the EU, and emergency talks on the Amazon wildfire crisis. (Photo by Dylan Martinez - Pool/Getty Images) , Photographer: Pool/Getty Images Europe

(Bloomberg Opinion) -- You know British politics has been turned on its head when a Conservative government jumps in to rescue a failing company, and Labour supporters criticize the bailout as market distorting and wasteful. Yet that’s the odd situation that arises from the U.K.’s decision to save struggling regional airline Flybe.

When faced with the collapses of travel agent Thomas Cook, contracting giant Carillion, British Steel and Monarch Airlines the previous Conservative government stood, rightly, to one side. Another airline with a similar sounding name, Flybmi, also got the cold shoulder.

But Flybe’s getting different treatment and it’s clear why. The government’s catchphrase, repeated over and over since its December election victory was delivered by the votes of poorer regions of the country, is “leveling up” — to mitigate the dominance of southeast England. Flybe presented Prime Minister Boris Johnson with the first real test of that commitment to the economy beyond London and he wasn’t about to flub it. The danger for his government is that the rescue plan ends up deferring the inevitable for Flybe and creates other problems.

The carrier, the U.K.’s most important for routes outside the capital, is often the only way people in more remote corners of the country can travel to other regional centers. Flybe’s owners — Connect Airways, a consortium of Virgin Atlantic, airport operator Stobart Group Ltd. and private equity firm Cyrus Capital — understood the power of that linchpin status when they appealed for help.

If the rescue makes sense politically, there’s an economic case too: Regional routes are enormously important for business and leisure travelers. And research has shown that small airports have a positive impact on the per capita income and productivity in their local area. The government is right to take this seriously given the income disparities around Britain.

All of this argues for doing something, but what? While the rescue plan hasn’t been published yet, Flybe is reportedly deferring an estimated 106 million pounds ($138 million) in annual Air Passenger Duty, which will help with its immediate cash flow crisis. There may also be a state-backed loan, Bloomberg reported, along with promises of additional funding from its owners.

It’s not surprising that British Airways owner IAG SA complained to the European Commission on Wednesday. Flybe passengers often connect onto the flights of BA’s rival Virgin Atlantic; and why should a competitor be propped up with preferential tax treatment? The government insists it will abide by European Union state-aid rules, and it would be surprising if the EU had any objection. The Flybe rescue hardly bares comparison to many state-aid cases, including Italy’s endless cossetting of Alitalia.

Even with an EU blessing, though, the Flybe decision risks unintended consequences. First, will the relief really make a difference? Flybe has been struggling for a while, reporting pretax losses of 9.4 million pounds in 2018. Before that it was Europe’s least profitable airline. While its customer numbers rose over the years, Flybe expanded its fleet too aggressively, leading to lower revenues per passenger seat.

The airline has also had to contend with Brexit uncertainty, a weaker pound, rising oil prices and limited access to the big hubs such as London Heathrow where landing slots go to more profitable routes. The margins on Flybe’s routes are wafer thin. Even now it’s not clear it will ever take off in the way the consortium hoped when they bought the airline for 2.2 million pounds last year. Might the government be pulled into a more muscular rescue down the road if this one doesn’t work?

Another risk is that this will set a precedent for other troubled companies once Britain leaves the EU and trade frictions take hold. As Johnson tries to deliver on his promises to voters in the English Midlands, north and elsewhere, it’s not hard to imagine the Tories slipping into the kind of interventionism they usually guard against.

Then there’s the question of environmental impact. Air Passenger Duty was introduced in the 1990s as a stealth tax, but it now serves an important environmental function, encouraging passengers to think twice before booking a flight. Britain has one of the world’s highest passenger duties, with various tiers, so taking another look at how these work is no bad thing. But if the government plans to offer relief more broadly, as it has indicated it might in its March budget, it risks undermining carbon reduction goals that it’s already behind schedule in meeting.

One alternative might have been to designate more of Flybe’s routes under “public service obligation” rules. PSOs are allowed under EU law for routes that are loss-making but worthy of a subsidy, and used liberally in France and other EU countries. The U.K. already subsidizes Flybe’s link between Heathrow and Newquay in Cornwall this way. Yet more PSOs means more burden on the taxpayer.

Nor does any of this respond to the bigger reason why Flybe is deemed so important: the perilous state of Britain’s railways. Not all Flybe’s routes would be convenient for business travelers by train, but fixing the problem of inadequate and often abysmally run rail services in much of England would go a long way to creating alternatives to air travel and providing the connectivity and economic boost promised by the Tories.

A long 2018 government report on the future of aviation in the U.K. warned that “supporting regional air routes can have unintended negative effects on the market as a whole.” It also noted that air connectivity “should act as a supplement to, instead of a substitute for” other forms of travel.

If Johnson’s government is serious about its net-zero carbon goal, and boosting regional growth and connectivity, the Flybe rescue won’t be enough and may even be a setback. New rail infrastructure will take time, but better and faster train links would be far greater value for the taxpayer in the long term.