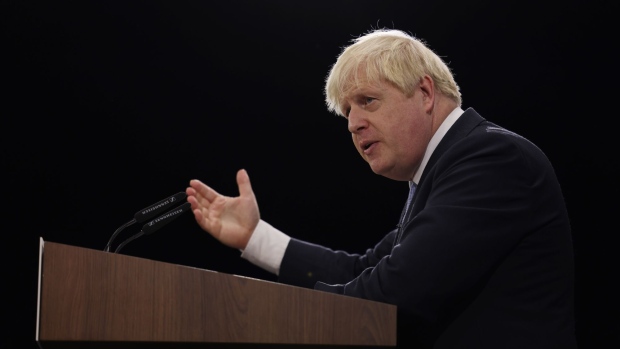 Boris Johnson, U.K. prime minister, delivers his keynote speech on the final day of the annual Conservative Party conference in Manchester, U.K., on Wednesday, Oct. 6, 2021. The U.K.'s governing Conservatives are meeting for their annual conference as the country grapples with a series of crises that threatens to undermine its economic recovery from the pandemic. , Bloomberg

Boris Johnson’s strategists believe his big-spending government, which will see U.K. taxes rising to their highest level since World War II, can increase its majority at the next general election.

The prime minister’s Conservative Party already has a parliamentary advantage of almost 80 seats, and is now working on how to not only hold on to those it took from the opposition Labour Party in 2019, but add to them.

It would be a rare feat for the Tories, who have governed alone or in coalition since 2010, to boost their support after so long in office. Wednesday’s budget and its 75 billion pounds ($103 billion) of stimulus is central to their plan.

Chancellor of the Exchequer Rishi Sunak announcement was far removed from his Thatcherite instincts to limit government spending. It was big on giveaways and on Johnson’s core promise to “level up” areas falling behind.

That strategy is a direct challenge to Labour. Many districts receiving funding are ones in the opposition party’s former northern heartlands, which switched to Johnson’s Tories in 2019. Sunak also enjoyed pointing out the projects he is funding in seats still held by Labour’s senior team.

Yet Sunak also hinted at a plan to keep traditional low-tax Tories happy, as well as provide a tried-and-tested political boost ahead of a vote. At a meeting of Conservative MPs late Wednesday, he was pressed on his earlier line that by the next election he wants taxes “to be going down, not up.”

The government is passing legislation that would put the deadline for the next general election in December 2024 -- five years after the last -- though most observers expect it to come in the spring of that year, or earlier.

That may give Sunak time to splurge now and still reduce the tax burden on households before heading to the polls. According to the government’s independent watchdog, the U.K. is projected to record a budget surplus of 12.5 billion pounds in the fiscal year 2023-24, rising to double that the following year.

Plenty could still go wrong, not least if the economy doesn’t recover as fast or as strongly as expected. Surging inflation raises debt servicing costs for Sunak, and risks angering voters with higher food and energy bills. A public inquiry into Johnson’s handling of the pandemic, and a housebuilding program that’s unpopular in some Tory districts, could also boost support for other parties.

But by announcing “the largest increase this century” in spending across government departments, Johnson’s Tories have set out their strategy.