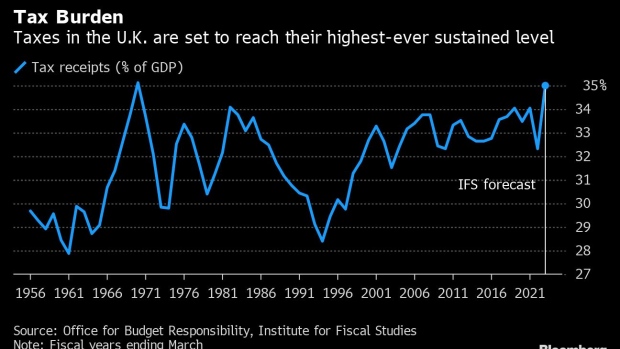 (Bloomberg) -- Prime Minister Boris Johnson hinted at future tax cuts for U.K. business even as his finance minister prepares to make historic rises over the next two years.

“You can take it that Rishi Sunak, as indeed am I, is a staunch, low-tax Conservative, and he believes in an enterprise economy,” Johnson said Monday in a television interview with Bloomberg Editor-in-Chief John Micklethwait.

The evidence for now is to the contrary. Johnson’s Conservative government is set to raise the tax burden as a portion of national income to 35%, which the Institute for Fiscal Studies says will be the highest sustained level since 1955.

Sunak plans a hefty increase in levies covering health and social care starting in April, and he’s announced a further 6 percentage-point increase in corporation tax to take effect in 2023. The chancellor is due to deliver a budget and three-year spending review on Oct. 27, though that’s unlikely to include any major tax cuts.

Conventional political wisdom is that by getting tax rises out of the way now, Sunak has given himself some leeway to reduce the fiscal burden in the run-up to the next general election. A vote must be held in 2024, though many lawmakers speculate that Johnson may call it early in 2023.

Sunak has said it’s his “sacred” duty to restore order to the U.K. public finances after racking up a peacetime record budget deficit last year to fight coronavirus and support businesses and workers through the pandemic. That’s made for tough decisions for the ruling Conservatives, who pride themselves on being both the party of business and of low taxes.

In March, Sunak said corporation tax will rise to 25% in 2023 from 19% currently. Then in September, he unveiled a 1.25% levy on workers, employers and dividends to fund health and social care. Johnson suggested that the higher tax burden may be temporary.

“We’ve been through a colossal pandemic which has sadly necessitated the expansion of state activity into all sorts of fields that neither you nor I would have wanted or would previously have contemplated,” the prime minister said. U.K. corporation taxes, he said, remain among the lowest in the developed world.