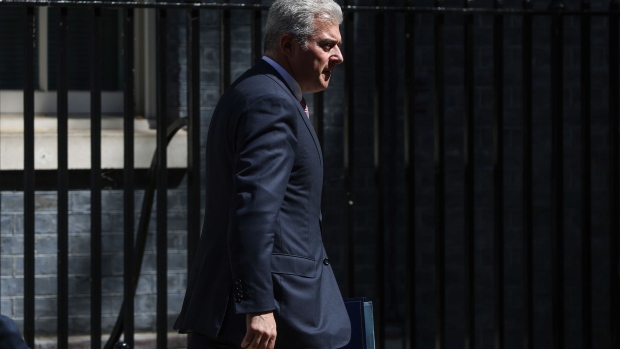 Brandon Lewis, UK Northern Ireland secretary, departs Downing Street following a cabinet meeting in London, UK, on Tuesday, May 17, 2022. The UK will lay out its plan to amend its post-Brexit trade deal Tuesday in a direct challenge to the European Union, which is insisting that Prime Minister Boris Johnson must honor the agreement he signed. , Bloomberg

(Bloomberg) -- Here’s the key news from London this morning.

Shell Plc: The energy giant said surging margins from fuel production could have added more than $1 billion to the earnings of its refining business last quarter, when gasoline prices broke records in several countries.

Currys Plc: The electronics retailer cut its 2023/24 profit margin target, citing the current economic outlook and inflationary headwinds as well as “the shift to online and the delays to transformation” caused by the pandemic.

As Boris Johnson is desperately clinging to power, rebel Tories are determined to hold another vote on his leadership as soon as next week. Having narrowly failed to oust him last month, they are confident of having the numbers to finish the job this time.

But who would take over? Here are the top contenders for the Conservative Party leadership position.

British Airways is nearing a deal with one of the unions representing check-in employees, a person familiar with the matter told Bloomberg, potentially avoiding further disruption after having to scrap thousands of flights due to a staff crunch.

And a consortium backed by South African billionaire Johann Rupert is preparing a higher takeover bid for Mediclinic International Plc, the country’s largest hospital operator, people with knowledge of the matter told Bloomberg.

Homebuilder Vistry Group Plc is set to update the market tomorrow. The company said last month it expects full-year profit to be at the top end of market forecasts, despite rising costs for some materials.