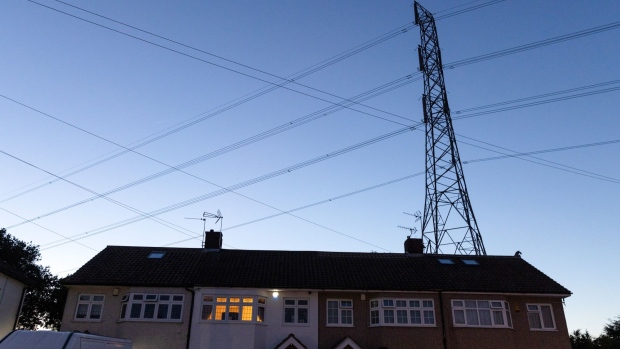 An electricity transmission tower near residential houses with lights on in Upminster, UK, on Monday, July 4, 2022. The UK is set to water down one of its key climate change policies as it battles soaring energy prices that have contributed to a cost-of-living crisis for millions of consumers. Photographer: Chris Ratcliffe/Bloomberg , Bloomberg

(Bloomberg) -- Boris Johnson held talks with energy companies to discuss how they plan to spend their bumper profits and explore ways to help UK households struggling with the soaring cost of living.

While the meeting on Thursday with firms including Centrica Plc, Drax Group Plc and RWE AG was convened by Chancellor of the Exchequer Nadhim Zahawi, the prime minister and Business Secretary Kwasi Kwarteng also attended, according to a readout from the Treasury.

Hinting that the government may yet slap new taxes on electricity generators, Zahawi told the meeting that ministers continue “to evaluate the extraordinary profits seen in certain parts of the electricity generation sector and the appropriate and proportionate steps to take,” according to the Treasury readout. The government earlier this year slapped a windfall tax on oil and gas producers, but had discarded the option of extending it to power producers.

Johnson’s administration is facing mounting criticism for not doing enough to prepare for a looming winter energy crisis, even as warnings mount about ever-higher domestic energy bills and his own administration’s analysis shows that planned power cuts may be needed in a “reasonable worst-case scenario.”

The prime minister has said he won’t make any major fiscal announcements while his ruling Conservative party elects his successor. Foreign Secretary Liz Truss is the front-runner in the run-off with former Chancellor of the Exchequer Rishi Sunak.

Johnson, Zahawi and Kwarteng urged the firms to invest more in North Sea oil and gas and also in renewable energy sources like biomass. A person familiar with the matter said they also discussed concerns about customers who refuse to pay their bills, electricity market reform, and what more can be done to help households with energy bills that are now forecast to more than double in coming months.

“It was noted that the market is not always functioning for consumers, and extraordinarily high bills will ultimately damage energy companies,” the Treasury said.

UK Plans for Blackouts in January in Emergency Energy Plan

Cornwall Insight and Investec both say Britons face average annual energy bills rising above £4,200 ($5,086) in January from just under £2,000 currently, stoking already soaring inflation. If cold weather combines with gas shortages over the winter, the UK could face an electricity capacity shortfall that would lead to organized blackouts for industry and even households under the government’s emergency planning.

While it’s normal for Kwarteng’s department to hold regular meetings with energy firms, it’s rare for the Chancellor and prime minister to attend.

The meeting comes as pressure builds on Truss and Sunak to detail exactly how they would help households cope once the price cap rises in October. The government is examining each of their proposals on cost-of-living support and energy policy in order to prepare officials to roll them out rapidly when one of them takes office on Sept. 6, according to one of the people.