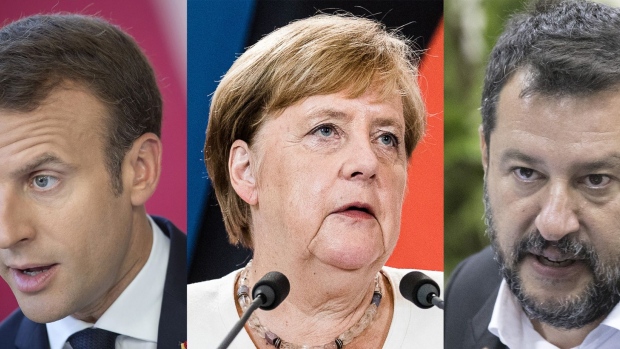 (Bloomberg) -- Boris Johnson wants something from everyone at the Group of Seven meeting in Biarritz, France this weekend. He’s hoping the half of the room that’s in the European Union will give him a better exit deal, and the half that isn’t will offer him free-trade deals.

The U.K. leader’s international debut will follow visits to German Chancellor Angela Merkel in Berlin on Wednesday and French President Emmanuel Macron in Paris on Thursday. With Brexit looming large, the tone of those meetings will affect his interactions at G-7, notably with U.S. President Donald Trump, who cut an isolated figure at last year’s gathering and sees an ally in Johnson.

As the gap between the EU and the U.S. yawns wider than it has for decades, the big question is where a post-Brexit Britain will land. Johnson seeks closeness with both and could potentially tip the balance on key issues from Iran to China’s Huawei Technologies Co.It’s a unique position that Trump could seek to exploit. As Jonathan Eyal, international director at the Royal United Services Institute in London, put it: “Trump will be the president who will not try to heal European divisions but rather try to explore and see how much wider they can be prised.”

With that in mind, here is a rundown of the key relationships.

The U.K. loves to boast about the “special relationship” it enjoys with the U.S. After Brexit, it’ll take on a new importance because a trade deal with the world’s biggest economy was touted as one of the great prizes of leaving the EU.

Johnson needs to forge a close relationship with Trump. But not too close. “If he wants to fight and win a general election quite soon, if he’s seen as Trump’s poodle, that won’t help him,” said Centre for European Reform Director Charles Grant.

The early signs are good. Johnson has spoken at least four times by phone with Trump since becoming premier, most recently on Monday. “He’s going to do a fantastic job,” Trump told reporters in the Oval Office on Tuesday. “We have a great relationship.” And in a further overture, Trump made clear how much he dislikes the EU: “I hate to say this to you, dealing with the European Union is very difficult. They drive a hard bargain.”

The U.S. leader has pledged to move “rapidly” to a trade deal with Britain yet earlier this month National Security Adviser John Bolton said that with the U.K. so focused on Brexit for now, the administration isn’t “pushing for anything on these broad and complex questions” such as Iran and Huawei.

But opposition Labour Party Leader Jeremy Corbyn has identified the rapprochement with Trump as a weakness. He described Johnson’s strategy as a “Trump-deal Brexit” that would open up the country’s beloved National Health Service “to takeover by U.S. private corporations.”The president’s description of the prime minister last month as “Britain Trump” wasn’t viewed as helpful by Johnson’s office.

Johnson will meet Merkel and Macron just before the G-7. He needs them onside if he’s to persuade the EU to reopen the deal that his predecessor Theresa May negotiated. Unfortunately, he doesn’t have much goodwill there: During the Brexit campaign, he compared the bloc’s goals with those of Adolf Hitler.

The risk for Merkel and Macron is that if they push back too much, they’ll drive Johnson toward Trump on issues such as Iran and the reach of China’s telecoms giant, where they want to retain European unity. Britain already  broke with its EU allies to join a U.S.-led initiative to protect shipping in the Persian Gulf which European nations had spurned. That followed  concern in Merkel’s administration that EU unity over Iran was under strain.

Italy, for its part, has its own grievances with Germany and France, from EU-inflicted austerity to open borders. Prime Minister Giuseppe Conte has just  resigned and waiting in the wings to seize power is anti-immigration hardliner Matteo Salvini: he’s the country’s most popular politician, a euro-skeptic and keen to be Trump’s closest ally in Europe.

If Brexit is to appear a success, Johnson needs to strike trade deals not just with the U.S., but also with large economies such as Japan and Canada. Both have agreements with the EU, and have refused to roll them over for Britain after Brexit, while they await the outcome of the divorce.“How can you do a trade deal with Britain when you don’t know what its relationship with the EU is going to be?” said Grant at the CER. “That is so important for any trade relationship they would want from us.”

Johnson has to tread carefully in particular with Japanese Premier Shinzo Abe, whose administration has spoken out about its anxieties around Brexit and the sort of no-deal departure that Johnson insists is on the table.

In June, Foreign Minister Taro Kono warned that “some companies are already starting to move their operations to other places in Europe.” Japanese companies including the Honda Motor Co. and Nissan Motor Co. established factories in Britain precisely because of the access to EU markets.

Despite his stance on Brexit and his mowing down a schoolboy at a rugby event in Tokyo a few years back, there’s goodwill toward Johnson in Japan. If you search online for Johnson’s name in Japanese, the first video is of him drinking peach juice from Fukushima and proclaiming it delicious—the sort of gesture that goes down well in Japan.

That just leaves Canada, just the sort of former member of the British Empire that Brexiteers held up as future partners after Brexit. Its trade deal with the bloc has also frequently been cited as a model for Britain’s future relationship with the EU, with Johnson himself repeatedly calling for a “Super‑Canada deal.”

This is ironic, as the British government has so far struggled to get any kind of Canadian trade agreement at all.

--With assistance from Isabel Reynolds and Jordan Fabian.

To contact the author of this story: Alex Morales in London at amorales2@bloomberg.net

To contact the editor responsible for this story: Tim Ross at tross54@bloomberg.net, Robert Hutton