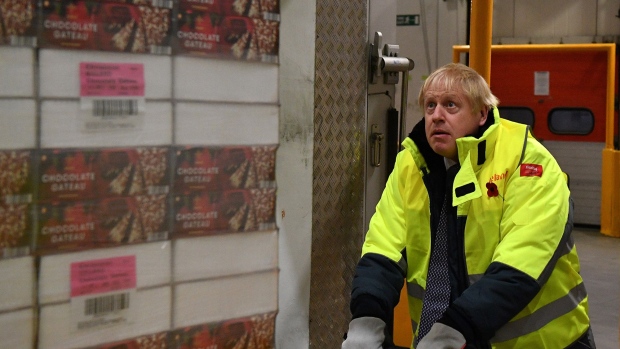 Prime Minister Boris Johnson moves a pallet of chocolate cake in a -25 degree celsius storage unit during a general election campaign visit to the headquarters of Iceland Food on November 8, 2019 in Deeside, Wales , (Photo by Daniel Leal-Olivas - WPA Pool/Getty Images)

If you listen to bookmakers, the central question in the U.K. general election is not whether Boris Johnson will win, but by how much.

Johnson is the overwhelming favourite to remain as prime minister after the Dec. 12 poll, according to bookmaker Paddy Power. At 3/1 on to lead the next government, punters would need to bet three pounds ($3.84) to win one pound -- effectively meaning the betting firm gives Johnson a 75 per cent chance to keep his job.

While that looks like good news for Johnson, odds suggest he’s not guaranteed an overall majority in Parliament -- which he has repeatedly said he needs to end the impasse over Brexit. Most betting firms rate his chances of winning an overall majority in the House of Commons at about 50:50, though with sentiment toward a Conservative majority.

On Monday, Ladbrokes placed a 60 per cent chance on a Johnson majority.

“A hung parliament was the most likely scenario according to the betting last week, but the bookies are reporting a fair move towards a Tory majority by punters over the weekend,” Ladbrokes said.

Analysts and traders study bookmakers’ odds to help predict the outcome of market-moving events, though their reliability was dealt a blow in the 2016 referendum on the U.K.’s membership of the European Union. As the campaign ended, odds implied a 90% chance of voters opting to remain in the bloc.

The current election odds are backed by recent opinion polls, which give the Conservatives a 12 percentage point lead over Labour on average.

The odds on Labour Party leader Jeremy Corbyn winning are 2/1 against, effectively a 33% chance, meaning gamblers would need to risk one pound to win two. His party has about a 5% chance of an overall majority in the House of Commons, according to Betfair.