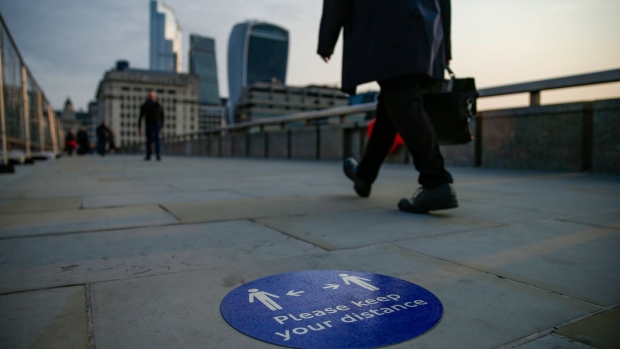 U.K. Prime Minister Boris Johnson announced plans to end social distancing and capacity limits at venues in England from July 19, saying that people must learn to live with coronavirus.

Face masks will be made voluntary in all settings and the government will no longer instruct people to work from home, in a decisive shift from legal requirements to personal responsibility.

All remaining businesses will be allowed to open, including nightclubs, and none will be required to demand any proof of vaccination or testing before entry. The final decision will be still need to be confirmed on July 12.

Ministers believe the link between virus cases and hospital admissions has been severely weakened, but not broken, by the vaccination program. Cases will continue to rise as people are allowed to mix more freely and these will lead to more hospitalizations and deaths, according to the government, but at a much lower level than before vaccines were rolled out.

“If we can’t open our society in the next few weeks, we must ask ourselves when will be able to return to normal,” Johnson said at a news conference, pointing to the upcoming “firebreak” of the school summer recess.

“We are trying to move from a system of very elaborate government rules, to one in which we rely on people to exercise personal responsibility,” he said.

But Johnson insisted he didn’t want people to get “demob happy” and raised the prospect of some restrictions returning in the winter if the virus surged again. “Clearly we will have to take whatever steps we will need to do to protect the public,” he said.

What Coronavirus Rules are Changing on July 19?

The U.K. is racing to vaccinate the population against the fast-spreading delta variant of the virus; 64% of adults have had two doses so far. That figure is not high enough for some scientists who warn that lifting virtually all restrictions now -- when millions are still not fully immunized -- could prove devastating.

Johnson announced the vaccine program would be accelerated for people aged under 40, reducing the interval between doses from 12 weeks to eight. People will still be legally required to self-isolate if they test positive or are exposed to the virus.

The premier was asked if he’d continue to wear a mask. Initially he said “it will depend on the circumstances,” but when Whitty said he’d wear them in crowded spaces, Johnson said he’d “obviously” do the same.

The government is also working with the travel industry to remove the need for people who had two shots to quarantine on return from an amber-listed country. Plans to remove the school “bubble” system in England are also likely to be set out in the coming days.

The final stage of the government’s road map was delayed by four weeks last month to allow more people to be vaccinated, a decision that ministers believe has saved thousands more lives.

The new rules mean there will no longer be any limits on social contact; currently only six people can gather indoors and 30 can meet outdoors.

There will be no more limits on the number of guests at life events such as weddings and funerals, and the “one meter plus” social distancing rule will be lifted everywhere except in a few limited settings including ports of entry.

All capacity limits in theaters, sporting arenas and concert halls will be lifted. Asked about the risk of major soccer tournament matches this week becoming so-called superspreader events, Johnson said: “My advice to everybody would be obviously to support England enthusiastically but in a responsible way.”

No proof of vaccination or negative test will be required for entry into any venue, after officials warned that the overall impact of a Covid status certification scheme would be disproportionate to the public health benefit at this stage of the pandemic.

It will be up to individual employers to decide the pace and level at which they want employees to return to the workplace.

--With assistance from Kitty Donaldson.