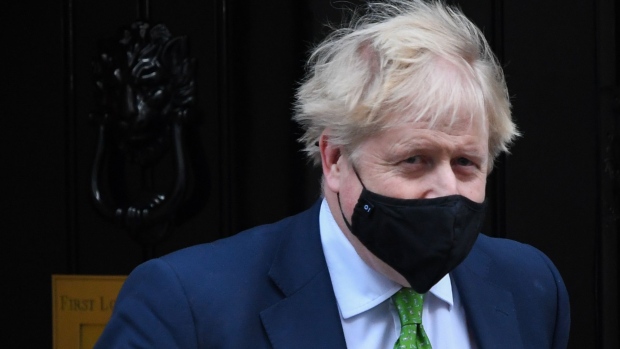 Boris Johnson, U.K. prime minster, departs number 10 Downing Street to attend a weekly questions and answers session at Parliament in London, U.K., on Wednesday, Jan. 19, 2022. A meeting of rookie Tory lawmakers sparked a flurry of activity in Westminster on Tuesday as Boris Johnson’s parliamentary enforcers tried to contain a growing rebellion against the prime minister. , Bloomberg

Prime Minister Boris Johnson refused to rule out delaying a 12-billion-pound ($16 billion) rise in national insurance amid concerns about the rising cost of living in the U.K.

Asked eight times during an interview whether his government would press ahead as planned with the tax rise in April, Johnson declined to commit to the date, although he said extra spending would be needed to fund the state-run National Health Service.

“If you want to fund our fantastic NHS, we have to pay for it,” Johnson told reporters at a hospital in Milton Keynes. “Listen to what I’m saying: we’ve got to put that money in; we’ve got to make that investment in our NHS.”

Johnson’s comments come after the Daily Mail newspaper quoted an unnamed Cabinet minister saying the whole of his cabinet would back delaying a 1.25% rise in the payroll tax due to come into effect in April. That’s a crunch month in a growing cost-of living crisis for Britons as energy bills are also due to increase while wider inflation has already touched its highest level in a decade.

Johnson managed to secure Parliamentary backing last year for the rise, designed to help pay for an NHS backlog exacerbated by the Covid-19 pandemic as well as the growing cost of social care. But since then, his political authority has significantly declined after a string of allegations over his team breaking pandemic lockdown rules, and he faces calls from within his own Conservative Party to help ordinary Britons cope with the rising cost of living.

While Johnson appeared reluctant to commit to the plans, his spokesman, Max Blain, told reporters on Monday that the national insurance rise will go ahead in April. “Cabinet took a collective decision to take this action to put money into our NHS to tackle the backlog,” Blain told reporters. “Cabinet stands behind this decision.”

The Mail on Sunday reported that in meetings with Tory members of Parliament, Chancellor of the Exchequer Rishi Sunak has sought to distance himself from the tax rise, referring to it as “the prime minister’s tax.” On Sunday Deputy Prime Minister Dominic Raab told Times Radio “I would much rather that we didn’t have to do it.”

Leader of the House of Commons Jacob Rees-Mogg, who oversees the parliamentary timetable, told the Cabinet earlier this month the tax should be scrapped. And on Monday in a string of media appearances, Education Secretary Nadhim Zahawi refused to be drawn on whether the tax rise should be delayed, arguing only that it is necessary to fund social care for adults.