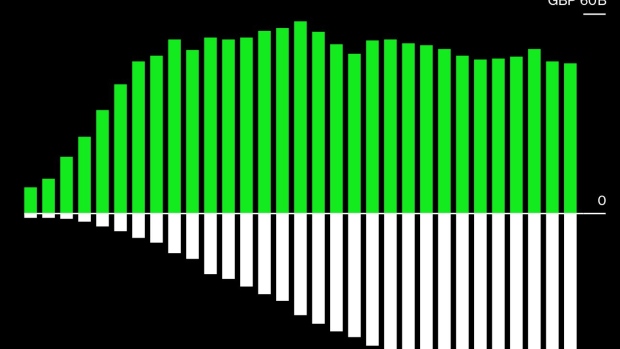 (Bloomberg) -- In less than 100 days Boris Johnson will host world leaders for a round of critical climate change talks. It’s supposed to be the moment when the U.K. prime minister showcases Britain’s post-Brexit global influence.But instead, the conference in Glasgow –- known as COP26 -- risks being undermined by the lack of progress on climate policies at home and resistance in his own Conservative Party.Johnson’s government has repeatedly delayed a series of key policy papers outlining plans to eliminate greenhouse gas emissions by 2050, including decarbonizing heat, and spreading costs fairly. As a result, the U.K. remains way off track in meeting the goal, according to its own advisers. A Downing Street spokeswoman said the strategies will be published this year.

Adding to Johnson’s headache, a group of his backbenchers will launch a campaign next month arguing the U.K. is going too fast in its decarbonization policies, putting an unfair burden on regular people.

Craig Mackinlay, the Conservative Member of Parliament leading the new group, said in an interview that he’s worried about the high costs of net zero, while “India and China are not engaging.”

The group will feature a number of prominent Brexit campaigners, such as backbencher Steve Baker and Nigel Lawson, Margaret Thatcher’s former finance minister. They’re both linked to the Global Warming Policy Foundation think tank, which questions the scientific consensus on man-made climate change. Mackinlay said the new group will use research from the GWPF, and he’s hoping to attract about 25 MPs.

Amber Rudd, a former minister in Johnson’s cabinet, who also held the energy brief during the Paris summit in 2015, where 197 countries signed a landmark deal, said Tory infighting threatened to undermine success at COP26.

“The host country needs to lead,” she said. “This growing drumbeat of militant skepticism will make other countries doubt the U.K.’s sincerity.”

She said discord at home could derail efforts by Alok Sharma, the incoming COP26 President and member of Johnson’s Cabinet, who’s been flying around the world in an attempt to ensure a deal is brokered.

He aims to keep alive the chance of limiting global warming to 1.5 degrees Celsius and “consign coal to history,” but is already struggling to achieve those goals.

At a Group of 20 meeting in Naples last month, countries refused to agree to end the use of coal for electricity. India, which had been a key hold out, then failed to show up to his London climate summit the following weekend.

On Wednesday, Keir Starmer, the leader of the opposition Labour Party accused Johnson of being “missing in action” on the issue.

“This is a test of the prime minister’s ambition for “global Britain”. Based on the government’s actions so far, or lack of, it’s implausible that this ambition will be met,” he wrote in the Guardian newspaper.

Johnson’s new climate spokeswoman, Allegra Stratton, has also made a series of gaffes in the past fortnight. Her campaign was designed to encourage citizens to take “microsteps” to tackle climate change. Instead, she appeared to criticize electric cars and told people to join the Green Party.Her suggestions included rinsing dishes before putting them in the dishwasher. The Committee on Climate Change has no data on the carbon savings from not rinsing dishes. However, in 2019, it said that if every household in the U.K. took one minute off a shower every day, it would save 215 million pounds ($299 million) on collective energy bills a year.

Also weighing on the U.K.’s reputation as it approaches the climate summit is the decision by Chancellor of the Exchequer Rishi Sunak to slash international aid spending to 0.5% of economic output from 0.7%, a reduction of about 4 billion pounds.

Sarah Champion, a Labour Member of Parliament who chairs The House of Commons International Development Committee said her interactions with international ambassadors on the matter show they’re “shocked” and “angry” at the decision, as are non-governmental organizations which have seen funding cut for projects at very short notice.

Sharma is now “in a very, very weak negotiating position, it’s basically do as we say and not as we do,” Champion said in an interview. “It’s hugely damaging obviously for the poorest in the world, but also hugely damaging for any vision of global Britain.”

Liberal Democrat Party Leader Ed Davey, who served as energy secretary in former Tory Prime Minister David Cameron’s coalition government and headed the U.K. delegation at three COPs, said the run-up to the Glasgow summit has been beset by deteriorating international relationships and a dearth of policy.

“The preparation for these talks has been lamentable,” Davey said. “I’m deeply alarmed by the failure to act decisively and ambitiously. There’s been a lot of talk and very little action from the U.K., both on the domestic front and the international front.”

“This is a global climate emergency, Britain is in the chair and we are frankly pathetic,” Davey said. “It is shambolic.”