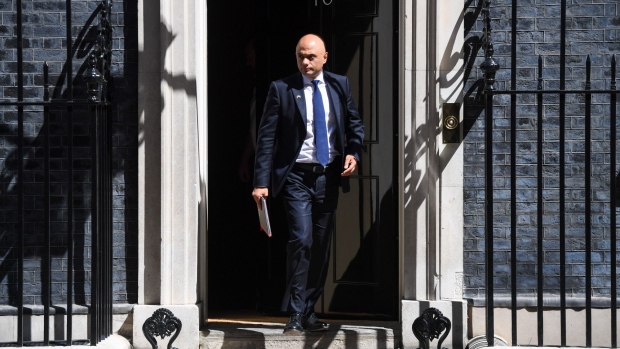 Sajid Javid, UK health secretary, departs following a weekly meeting of cabinet ministers at 10 Downing Street in London, UK, on Tuesday, July 5, 2022. Boris Johnson was aware of media reports and speculation about alleged misconduct by Conservative MP Chris Pincher, but promoted him to a senior government role because there was no formal complaint against him at the time, the prime minister’s spokesman said. , Bloomberg

British Prime Minister Boris Johnson is on red alert for signs of a coordinated plot from his ministers to bring him down, according a senior government official.

The prime minister and his team are braced for more potential resignations from his cabinet on Wednesday morning which would signal that senior ministers have been conspiring to end his premiership, according to the official, who asked not to be named discussing private conversations.

Johnson is expecting more junior ministers to step down and is prepared to ride out those blows on a difficult day in which he’ll be under constant scrutiny, facing questions in the House of Commons at noon and then appearing before a parliamentary committee.

But the prime minister’s allies judge that he’d struggle to survive if six or eight of his cabinet quit because that would leave him struggling to even form a cabinet and lay bare his lack of support, the official said. Chancellor Rishi Sunak and Health Secretary Sajid Javid resigned on Tuesday night, triggering a dramatic scramble to shore up the administration.

So far, officials in No. 10 reckon that the other key figures such as Foreign Secretary Liz Truss and Defense Secretary Ben Wallace will continue to support the prime minister, but they are taking nothing for granted. Education Secretary Nadhim Zahawi agreed to replace Sunak at the Treasury.

Late on Tuesday a string of junior officials followed Sunak and Javid in abandoning Johnson. Alex Chalk resigned as Solicitor General, Jonathan Gullis, a vocal supporter of Johnson in the House of Commons, quit as a ministerial aide as did Virginia Crosbie.

“I know you love this country,” Crosbie said in her resignation letter. “You can serve it one last time by leaving office.”

Tory anger at Johnson has been building for months over his conduct in office, including becoming the first sitting premier found to have broken the law when he was fined over the illegal parties in Downing Street during the pandemic.

The latest row was triggered last week when Tory MP Chris Pincher resigned as a government whip, or political enforcer, following newspaper allegations he had groped two men. That was damaging to Johnson, who had promoted Pincher to the role in February in a bid to bolster his own faltering support. Downing Street was forced to change its position after it emerged that Johnson had known about earlier allegations against Pincher.

Another threat for Johnson is the prospect of his opponents within the party taking control of the critical 1922 Committee of backbench MPs. If the chairman of the committee simply told Johnson that he’d lost the confidence of the party he’d most likely just ignore him, the official said.

However, if the rebels were able to demonstrate they could defeat the prime minister in a confidence vote, they might be able to change the party rules to trigger another ballot and that could force Johnson from office. Johnson narrowly survived a confidence vote last month with some 40% of his own MPs voting against him.

The other danger is that the main opposition Labour Party could force a confidence vote in the House of Commons. Officials in No. 10 aren’t confident they have the support to win that vote and defeat could see them forced into an election when Johnson is at his weakest.

The leader of the opposition can call a confidence vote at any point and the convention is that one would then be held. It needs a simple majority to pass. If the government loses it has 14 days to try to win another vote, most likely by selecting a different Tory leader. If they cannot command the confidence of the house after two weeks then there is a general election.

On Wednesday, Johnson faces Prime Minister’s Questions and then what could be a grueling session of Parliament’s powerful Liaison Committee, where lawmakers will probe him on “integrity in politics and the rule of law.”

“The public rightly expect government to be conducted properly, competently and seriously,” Sunak wrote in his resignation letter. “I believe these standards are worth fighting for and that is why I am resigning.”