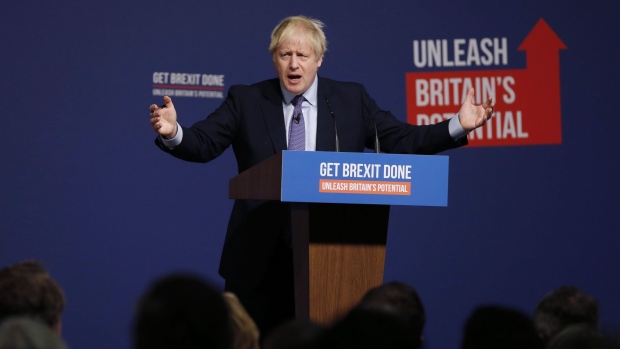 Boris Johnson’s Conservative Party is on track to win its biggest majority in more than three decades, according to the most hotly anticipated poll of the general election campaign.

The Tories will win a majority of 68 seats in the Dec. 12 election, according to a YouGov poll which used a technique that more closely predicted the 2017 election than standard surveys. Such a majority would allow Johnson to deliver on his promise of getting his Brexit deal through Parliament by Jan. 31, and could also give him some freedom to make compromises in subsequent negotiations with the European Union.

The poll put the Conservatives on course to win 359 of the 650 seats in Parliament, a gain of 42 on the last election, while Jeremy Corbyn’s Labour Party is set to win 211 seats, a loss of 51. Of the smaller parties, the Liberal Democrats are set to win 13 seats, while the Scottish National Party are on track to win 43 seats. This would be the best Conservative result since Margaret Thatcher won her third term in 1987.

“As expected, the key thing deciding the extent to which each of these seats is moving against Labour are how that seat voted in the European Union referendum,” said Chris Curtis, YouGov’s political research manager. “This is allowing the Tories to overturn quite substantial majorities.”

Through a process called Multilevel Regression and Post-stratification, or MRP for short, YouGov aims to identify different types of voters, and predict their behavior. Then the company works out how many of each of these voter types there are in each electoral district to produce a forecast.

In the 2017 election, YouGov’s MRP poll predicted that Theresa May would lose her majority, at a time other polls were suggesting her Conservatives would secure a big win.

The pound rose to 1.2948 against the dollar, continuing an upward trend after speculation earlier in the day that the poll would show a Tory majority.

The poll was bleak for Corbyn, showing Labour on course for its worst election result since 1983. It had the party winning no new seats and watching the crumbling of its so-called “red wall” of districts in the north of England that have voted Labour for decades. Seats such as Bishop Auckland and Newcastle-Under-Lyme that are traditionally Labour but also strongly in favor of Brexit were forecast to fall to the Tories. The Conservatives were also on course to make gains in North Wales, in seats like Clwyd South and Wrexham, where they have previously struggled to shake off the legacy of closing down coal mines in the 1980s.

Meanwhile, in areas that opposed Brexit, the poll suggested the Conservatives still had sufficient support to hold their seats.

Members of parliament who defected from the Tory Party or were thrown out over their Brexit stance were predicted to lose their seats. That included Dominic Grieve, standing as an independent candidate in Beaconsfield, and Sam Gyimah who is competing to win Kensington and Chelsea for the Liberal Democrats. That wealthy London borough is expected to swing back to the Tories after an unexpected Labour win in 2017.

In Scotland, the SNP were predicted to dominate, winning five seats from Labour, two from the Conservatives and one from the Liberal Democrats. Nigel Farage’s Brexit Party wasn’t expected to win any seats and the Greens would retain their one in Brighton Pavilion.

However there was uncertainty in the forecast. Of the predicted Conservative gains, 30 were by less than 5 per cent. And the poll itself could change behavior. By offering a seat-by-seat prediction, it could enable voters who oppose Brexit or the Conservatives to see how best to vote against Johnson.

And by apparently confirming other traditional polls that suggest the result isn’t in doubt, the poll could cause complacency among Conservative supporters, and lead voters who dislike Johnson but don’t want Corbyn to be prime minister to conclude they have nothing to worry about.

Possibly with those eventualities in mind, Johnson’s top aide earlier on Wednesday made a direct appeal to Brexit-supporting voters to back the prime minister, even if they weren’t natural Tory supporters. In his personal blog, Dominic Cummings warned that despite recent polls, “things are MUCH tighter than they seem and there is a very real possibility of a hung parliament.”

The poll of around 100,000 people, conducted Nov. 19-26, is a further blow to Corbyn. On Wednesday he tried again to draw a line under accusations of anti-Semitism that engulfed his party, and turn the focus onto Johnson, accusing the prime minister of preparing to put the National Health Service on the table in trade talks with the U.S. Johnson rejected the charge.

The prime minister meanwhile apologized to Muslims for any offense caused by Conservative Party members, after the Muslim Council of Britain criticized the Tories over their handling of Islamophobia in their ranks. Johnson himself wrote in a 2018 newspaper column that Muslim women who wear burqas look like “letter boxes.”