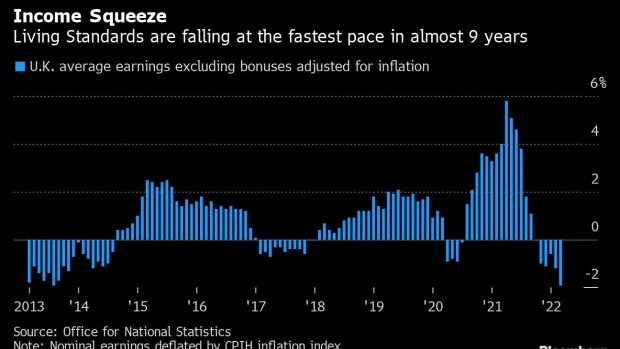 (Bloomberg) -- Prime Minister Boris Johnson’s government is trailing the Labour opposition on the issue of managing inflation, a poll found, suggesting the cost-of-living crisis is increasingly harmful to the Conservatives.

YouGov Plc said a record 72% of those surveyed think the government is handling the economy badly, and three-quarters think it’s doing poorly with inflation. More than half of those who voted Conservative in 2019 voters faulted the government.

Voters were not sure Keir Starmer’s Labour Party would be better at handling the economy, but gave the opposition a clear advantage when it comes to inflation. Asked which party would do better at holding down prices, Labour beat the Conservatives by 28% to 14%, the poll showed.

Consumer prices have surged at the strongest pace in three decades, eating away at spending power and delivering the biggest blow to living standards in the UK in at least a generation. That squeeze is set to intensify with the government raising taxes and further price rises in store for everything from food and energy to clothing.

YouGov said its survey suggests a sharp deterioration in sentiment from a year ago, when just 40% said the government was handling the economy badly. The company surveyed 1,819 adults from May 14 to May. 16.