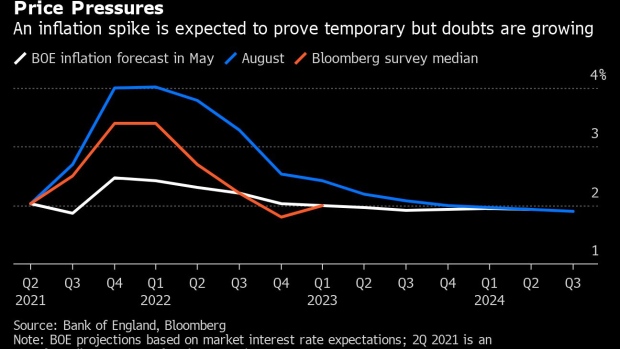 (Bloomberg) -- The warnings of a difficult winter for the U.K. are stacking up fast. A power supply crisis is threatening consumers with soaring bills while a shortage of truck drivers has led to empty supermarket shelves and forced some gasoline stations to close.

Yet, it’s the creaking health care system that remains the most emotive political battleground as the two biggest parties seek to rally support at their annual conferences over the next 10 days. No issue in Britain carries more weight—and potentially more danger—as the acute impact of the pandemic reverts to a chronic crisis.

Prime Minister Boris Johnson is staking his claim as the savior of the National Health Service with a 36 billion-pound ($49 billion) levy on workers and businesses. It’s a huge gamble for Johnson, who angered some within his Conservative party by reneging on a pledge not to increase taxes and needs voters to forget a decade of Tory austerity that led to soaring waiting lists.

But it offers massive rewards. The opposition Labour Party founded universal free health care after World War II and has traditionally been seen as its protector. If Johnson can seize that mantle, it will embellish the sea change in British politics and cement his grip on power.

“The government basically parking its political tanks on health and social care presents huge problems for Labour,” said Richard Sloggett, a former government adviser and founder of think tank Future Health. The challenge for Johnson is to execute. “This money will buy some improvement, but will it match the public’s expectation?,” said Sloggett. “That’s the real acid test.”

After the U.K. recorded the highest death toll in Western Europe from Covid-19, the NHS is facing a perfect storm. Cases remain high and segregating Covid patients means hospitals have fewer beds open than normal. That has a knock-on effect on emergency departments where people are being forced to wait longer. On top of all this, staff are sick or isolating.

The waiting list for planned care in England is at a record high of 5.6 million people after procedures were canceled during the height of the pandemic. That could climb to 13 million, the government warned, as increasing numbers of people come forward for delayed treatment.

A report by the Institute for Public Policy Research published on Friday said cancer care would need to be at 115% of 2019 levels to clear most of the backlog for therapies and diagnostics by next year and prevent many deaths.

Britain’s successful NHS-run vaccination program has stood out, but the health service already lagged behind its European peers on most metrics: per-capita hospital beds, critical care and medical technology among them. The latest OECD data shows there were 9.4 CT scanners per one million people in 2014, one of the lowest rates in the developed world.

With that backdrop, the omens aren’t good for Johnson, even though an election isn’t likely until at least 2023. While some 85% of the new money raised over three years from next April will go to the NHS front line, the reality is that the situation isn’t rare in Britain and neither are efforts to fix it.

YouGov Plc polling shows health has consistently been among the U.K. electorate’s biggest concerns, overtaking Brexit issues after Covid-19 struck. But skeptical Conservative members of Parliament warn that there will never be enough money for the NHS. Plus, households are already faced with rising costs and the economy has been hit by a drop in consumer confidence.

“Throwing other people’s money down a bottomless pit does not become a good idea if we put the NHS logo next to it,” former minister Jake Berry, leader of a group of MPs who won Labour seats in northern England at the last election, told parliament.

After winning over blue-collar voters and some of Labour’s former industrial strongholds, Johnson’s push on the NHS is another sign of how he's turned British politics on its head. In 2002, the Labour government also hiked National Insurance from payrolls to fund health spending, by 1%. The Conservatives attacked it as a “tax on working families.”

Now, it’s Labour using that attack line against the Conservatives. Leader Keir Starmer said he instead backs taxes on private landlords to raise funds. In an essay ahead of the party’s gathering in the English city of Brighton starting on Saturday, he also vowed to “focus on preventing the ills that plague society, not just patching them up.”

The NHS has been a go-to political card for Johnson, who will head to his own party’s conference in Manchester that starts on Oct. 3.

He deployed the fabled NHS as a political weapon during the campaign to leave the European Union, slapping it on the side of a red bus, and in his 2019 election victory speech. Over the course of the pandemic, when he himself ended up in intensive care after catching the disease, the message during lockdown was stay at home to save the NHS.

But the health service is now facing the toxic combination of towering levels of demand and restricted capacity, plus a potential surge in cases of influenza. “We’re seeing levels of pressure in the urgent care system now that we would normally associate with the middle of winter,” said Sarah Scobie, deputy director of research at health think tank Nuffield Trust.

To understand why the situation has got so desperate for the NHS, look at the position it was in before the pandemic hit. Waiting lists for care in England jumped from 2.9 million people to 4.4 million in the five years to February 2020, according to the Institute of Fiscal Studies think tank, and there were 39,000 nursing vacancies in England when Covid struck.

That followed a decade when government spending on health grew at an average real-terms rate of 1.6% per year between 2009-10 and 2019-20, lower than any previous decade in NHS history, the IFS said in a report on Sept 10. Capital spending on the NHS—for new buildings or equipment—was slashed and is lower than many other developed nations.

“Essentially what we have are frontline services that are always running, in best case scenario, pretty close to capacity,” said Layla McCay, director of policy at the NHS Confederation.

Johnson has promised action. In the House of Commons on Sept. 7, he declared again that his Tories are “the party of the NHS.” Labour is having none of it.

“They have imposed upon the NHS the longest financial squeeze in its history, they've cut thousands of beds, they’ve left our NHS overwhelmed and understaffed heading into a pandemic,” the party’s health spokesman, Jonathan Ashworth, said in an interview. “People are not fools and the Tory party are trying to take people for fools.”