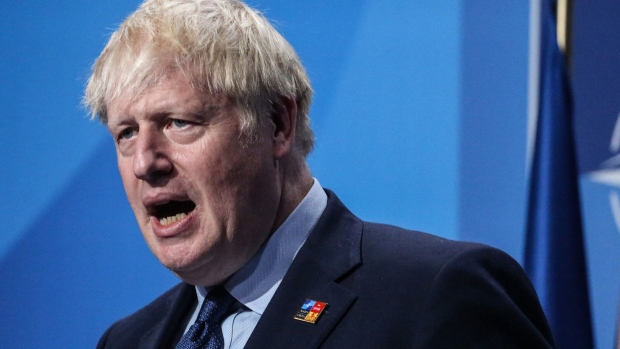 Boris Johnson, UK prime minister, during a news conference following the final day of the North Atlantic Treaty Organization (NATO) summit at the Ifema Congress Center in Madrid, Spain, on Thursday, June 30, 2022. Turkey's change of heart on supporting NATO membership for Sweden and Finland brought the alliance one step closer to bolstering its eastern front with Russia. , Bloomberg

(Bloomberg) -- Boris Johnson is under pressure to explain what he knew and when after a string of allegations surfaced over the weekend about the past sexual behavior of Chris Pincher, the Conservative MP who quit last week as one of the prime minister’s enforcers, citing his own drunken antics.

The UK prime minister late on Friday suspended Pincher from the Conservative Party, almost a day after the Sun reported allegations that Pincher groped two fellow guests at a private club. Pincher’s office didn’t respond to emailed requests for comment made on Friday and Sunday by Bloomberg News. Pincher didn’t respond on Sunday to a phone message seeking comment.

Parliament’s Independent Complaints and Grievance Scheme is now probing the matter, and there are growing calls for Johnson to spell out why he named Pincher as deputy chief whip in February, despite the MP quitting a similar role in 2017 amid allegations he had made unwanted sexual advances on a former Olympic rower.

The opposition Labour Party late on Sunday ratcheted up the pressure with a letter to the prime minister demanding to know if he was aware of complaints about Pincher before promoting him. “Only Boris Johnson could have looked at this guy’s record and thought ‘he deserves a promotion,’” Labour Chair Anneliese Dodds, the author of the letter, said in a statement.

The prime minister returned to the UK on Thursday evening, shortly before the Pincher story was broken by The Sun newspaper. Johnson spent 8 days traveling between three summits on two continents, and may face the House of Commons as early as Monday to make a statement on the visits. He’s also due to face scrutiny by lawmakers at his regular question-and-answer session in the Commons on Wednesday, before a rarer appearance later in the day to take questions from senior MPs on Parliament’s Liaison Committee.

The Pincher scandal adds to a string of headaches for a weakened Johnson, who narrowly survived a confidence vote of Tory MPs last month. He’s also grappling with soaring inflation that’s sparked a cost-of-living crisis for ordinary Britons, and the threat of a summer of strikes from workers including rail staff, postmen, teachers and trial lawyers.

Normally Tory-backing papers turned on Johnson at the weekend, with the Sunday Telegraph’s cover story headlined “PM ‘turned blind eye to sex pest warnings’” and the Mail on Sunday splashing on its front page that the premier “knew all about” allegations against Pincher two years ago.

Meanwhile a group of Tory staffers who are campaigning for standards to improve in the Parliament, said in a statement that they were disappointed at how long it took for the Tories to suspend Pincher from the parliamentary party.

“We were disappointed not only by how long it took to remove the whip from Pincher, but also at the continued lack of clarity about the PM’s knowledge of his behavior,” Conservative Staffers for Change, the pressure group set up by two Tory aides, Henry Dixon-Clegg and Angus McVean, said. “This is about more than just the culture in Westminster, it is about the PM’s failure to act on warnings of serious misconduct from those in government.”

Johnson’s office on Sunday referred Bloomberg to comments made on Friday by his spokesman, Jamie Davies, that the premier was not aware of “specific allegations” against Pincher at the time of his appointment, and with no “formal” complaints made, there “was no basis” to stop it.

On Sunday, Work and Pensions Secretary Therese Coffey told Sky News that she had been told Johnson “was not aware of specific claims that have been made” about Pincher before appointing him. She later told the BBC that she hadn’t spoken to Johnson about the matter, and that she had been briefed by the 10 Downing Street press office.

But Johnson’s former top aide, Dominic Cummings, suggested on Twitter that the premier, who he has likened to an out-of-control shopping trolley, used to refer to the MP as “pincher by name pincher by nature.” Since being acrimoniously forced from his post at the end of 2020, Cummings has frequently surfaced to throw dirt at Johnson.

Pincher said in his latest resignation letter that he’d “embarrassed” himself and “caused upset” to others. He made denials to UK newspapers, including the Sunday Mirror, over a string of allegations that he made unwanted advances on aides and fellow MPs over many years. Following his 2017 resignation, he was cleared of wrongdoing by a Tory Party probe. The MP issued a statement on Saturday -- reported by the Press Association -- saying he is seeking professional medical support.