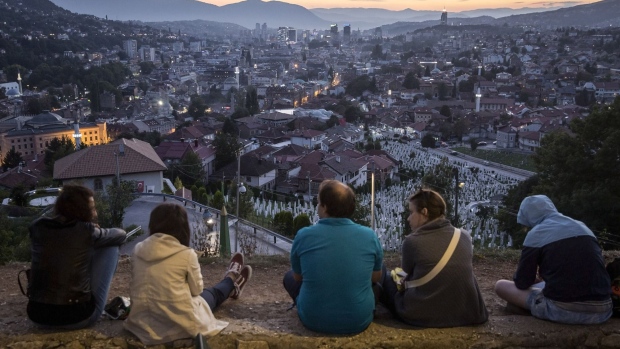 Tourists look out over a cemetery, toward commercial and residential buildings on the city skyline, in Sarajevo, Bosnia, on Monday, Sept. 10, 2018. Bosnia risks being collateral damage as world powers jostle for influence in a historical flashpoint. Balkan leaders emboldened by Russia, Turkey and Donald Trump’s revisions to U.S. foreign policy are seeking to unpick ethnic and territorial agreements that have underpinned an anxious peace for two decades. Photographer: Oliver Bunic/Bloomberg , Bloomberg

“A renewed interest in Bosnia by the new U.S. administration, combined with European Union efforts, could give the country a unique chance that must be used,” Valentin Inzko said in an interview from his office in Sarajevo on Tuesday. “We need to be more robust, more prescriptive, and we need to act fast. Otherwise we will lose the Balkans.”

While a U.S.-brokered peace accord in 1995 stopped Europe’s bloodiest conflict since World War II, it left the nation divided along ethnic lines with weak centralized rule.

As part of the Dayton peace agreement, the Office of High Representative was created to oversee the implementation of the treaty. After 12 years in office, Inzko is leaving this month. His replacement, Christian Schmidt of Germany, will start in June but has already had a run-in with Russia, which hasn’t approved his appointment and has lobbied to abolish the post.

Western officials have renewed the push for Bosnia to execute constitutional and electoral-law changes so it can progress on its path toward joining the EU.

But politicians from the country’s three main groups have failed to agree on the changes, effectively halting Sarajevo’s efforts to advance its EU accession path. The lack of progress since applying for membership in 2016 has sparked an exodus of citizens over the last decade, with Inzko estimating more than half a million people have moved abroad.

The 71-year-old envoy also warned against entering any debate about redrawing borders in the Balkans, a subject that is threatening to ignite simmering political tensions in the nations that make up the former Yugoslavia.

“Anybody who wants to change borders in the Balkans should first visit graves and military graves throughout Europe,” he said. “Call your entity whatever you like, but live under European umbrella. Anything else is too dangerous.”