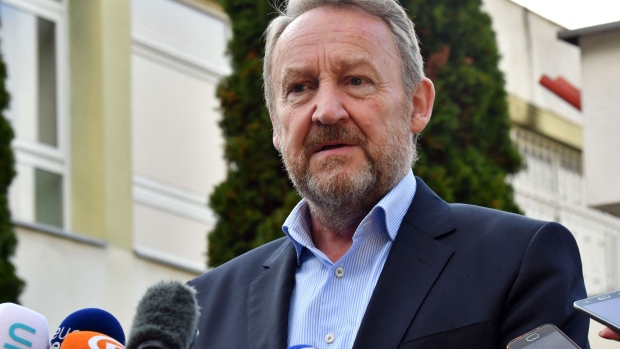 Bakir Izetbegovic, the leader of the largest Muslim party SDA, lost a bid for a seat in the presidency. Photographer: Elvis Barukcic/AFP/Getty Images , Photographer: ELVIS BARUKCIC/AFP

(Bloomberg) -- Bosnia-Herzegovina’s elections triggered an overhaul in the nation’s collective presidency, but the result of the ballots has little chance of ending fragmentations along ethnic lines.

Voters in the Balkan country of 3.3 million chose representatives for multiple levels of government on Sunday, including the parliament in the capital Sarajevo and the tripartite presidency of Bosnia’s complex power-sharing structure between the three constituent camps -- Muslims, Serbs and Croats.

Almost three decades after a US-forged peace treaty ended a war in Bosnia, the nation remains divided into two ethnically defined entities -- the Serb-run Republika Srpska, whose leaders seek more autonomy and even secession -- and a Muslim-Croat union, plagued by internal rivalry. The two are loosely bound by a central government.

In a major upset, Bakir Izetbegovic, the leader of the largest Muslim party SDA, lost a bid for a seat in the three-member presidency to Denis Becirovic, a reformist Social Democrat backed by opposition.

“It’s not a time for triumph or euphoria, I want to think of all the deprived and poor people who have no reasons to celebrate” because of the weak economy and low living standards, Becirovic said. “We have to calm emotions and passions, no politician is worth neighbors fighting over him.”

The Croat representative in the top body, veteran politician Zeljko Komsic, kept his post there, despite complaints by the Croat community that he wins with Muslim votes due to Bosnia’s troubled voting system.

The vote was also held for separate administrations of the two entities, including for the president of Republika Srpska. Dodik won that seat after a campaign demanding more autonomy for both halves of the country, and boasting his close ties with Russian President Vladimir Putin.

Bosnia has had an international envoy steering its post-war recovery for more than two decades. Christian Schmidt, who currently holds the job, used his authority to enhance Croats’ representation in the entity they share with the Muslims, or Bosniaks.

“I imposed measures that will improve functionality of institutions of the (Muslim-Croat) federation,” he said in a video address, vowing to defuse recurring paralysis in the complex power-sharing system.

The changes “will enable all citizens to have their voice heard and to ensure that those who they elect will represent them,” he said.

The US Embassy in Sarajevo and the government of neighboring Croatia welcomed the move.

“The main danger for Bosnia-Herzegovina is neither war nor secession, but the slow and long dying of society, in the material, political and worldview sense,” said Zarko Puhovski, political science professor at the University of Zagreb.

While Schmidt’s electoral law changes will probably allow faster changes and prevent the institutional vacuum that the country experienced before, the move “would look less arrogant if he chose some other timing, not the election night,” Puhovski said.

(Updates with details from leaders from sixth paragraph.)