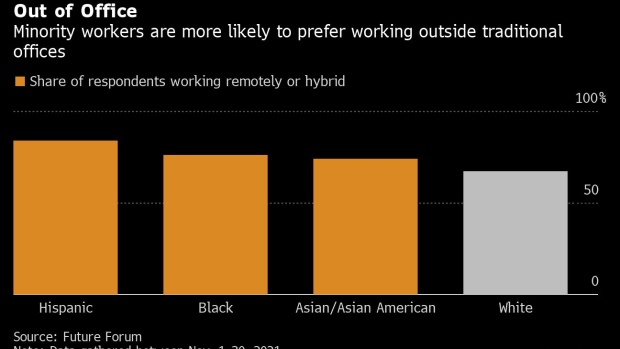 An employee works at a laptop computer overlooking Leningradsky Avenue, inside the VK Company Ltd. office in Moscow, Russia, on Wednesday, Jan. 19, 2022. An insurance group part-owned by Gazprom PJSC bought a 45% stake in MF Technologies, a company that controls the majority of voting shares in VK. Photographer: Andrey Rudakov/Bloomberg , Bloomberg

(Bloomberg) -- Among the biggest worries that executives have about remote work is a phenomenon known as “proximity bias,” meaning that the people who choose to return to offices will get ahead, while those who stay home will fall behind.

And yet, despite that very legitimate fear — and how it might hurt underrepresented workers — most bosses still prefer working in offices, and want their underlings do the same, a survey released Tuesday finds.

More than four out of 10 executives ranked the potential inequities between remote and in-office employees as their number one concern, according to a Future Forum survey of more than 10,000 white-collar workers. (Around 2-3% of respondents are executives.) Yet, the quarterly poll found that bosses are twice as likely to prefer working in the office at least three days a week compared to rank-and-file staff. Women and minority workers are more likely than other groups to want to stay home, adding to fears that the return to office push could further exacerbate workplace inequalities.

“Companies have to understand that their diversity efforts and their future of work plans are going to be linked,” said Brian Elliott, a Slack Technologies executive who oversees Future Forum, a research consortium created by the software maker. Slack, which makes virtual collaboration software, benefits from a remote workforce.

The survey highlights one of the most contentious topics facing managers as they try to come up with hybrid-work schedules that keep employees both engaged and productive amid record quit rates: Face time. Just being seen in the office can affect performance evaluations, promotions and job security, research from professors at the University of California, Davis and North Carolina University has found. Jack Welch, the former chief of General Electric Co. whose management approach was widely copied, once said in a Bloomberg Businessweek advice column that “the road to the top is paved with being there.”

Workers are once again being summoned back to downtown high-rises now that Covid-19 infections from the omicron variant have peaked or are expected to in coming weeks. Credit Suisse Group asked U.S. staff to return to the office on Feb. 1, while Citigroup Inc. employees in New York, New Jersey and Connecticut are now preparing to come back on Feb. 7. Companies in the U.K. are also telling their London-based staff to return to their desks in the coming weeks after the government said people no longer needed to work from home.

More than half of those surveyed by Future Forum are in hybrid working arrangements — many of whom say that’s their preferred environment.

Companies juggling remote and in-office workers can try to maintain a level playing field by insisting that if one employee has to dial into a meeting, then everyone does, Elliott said. Still, the more time executives spend in the office, the more pressure workers might feel to be there as well.

“This is an opportunity for organizations to reevaluate, refresh or maybe even start over with some of their management processes,” said Ella Washington, a management professor at Georgetown University’s McDonough School of Business. “No one wants to hear that, but it’s not effective for us to shift over old models to this new way of working.”

Slack, which commissioned the survey and makes virtual collaboration software, benefits from a more remote workforce.