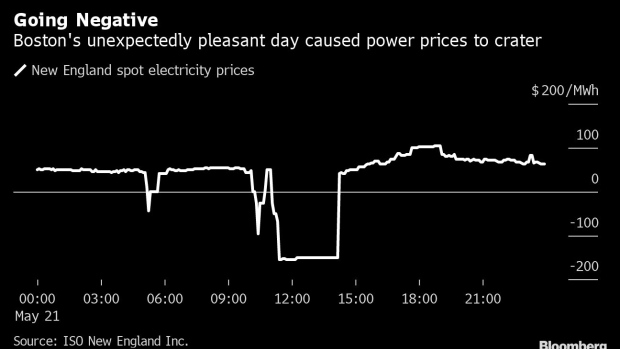 (Bloomberg) -- A blanket of clouds and a cool breeze wafting over Boston this weekend curbed air conditioning needs so much that electricity prices cratered to -$150 a megawatt-hour.

The city’s weather was so unexpectedly pleasant on May 21 that the New England grid had too much supply and some generators had to pay consumers to take their power, according to the grid operator. With clouds deflecting the worst of the sun’s heat, Boston’s high was just 71 degrees Fahrenheit (22 Celsius) instead of the blistering heat that had been previously forecast for the city, according to the National Weather Service.

“Weather forecasts had projected temperatures in the mid-90s for the Boston area, and those temperatures did not materialize,” said Matthew Kakley, spokesman for grid operator ISO New England. “This led to electricity demand coming in well under forecast.”

Around midday Saturday, New England electricity consumption was coming in 22% lower than the amount of supply the grid had contracted for that period. Spot power fell to negative levels at 10:30 a.m., and stayed there for about four hours, according to the grid operator’s website.

Usually, high temperatures lead to high energy prices, because people crank up their air conditioners and fans, driving up demand for electricity.

When those clouds started to burn off later in the day, the temperature began to rise throughout the suburbs, but Boston got a further reprieve as breezes drifted in over the Atlantic, said Kristie Smith, a National Weather Service meteorologist in Norton, Massachusetts.

Grid’s control room operators issued an unprecedented “minimum generation” alert to generators to throttle back their supply to ensure the system stays balanced with demand, according to Kakley.