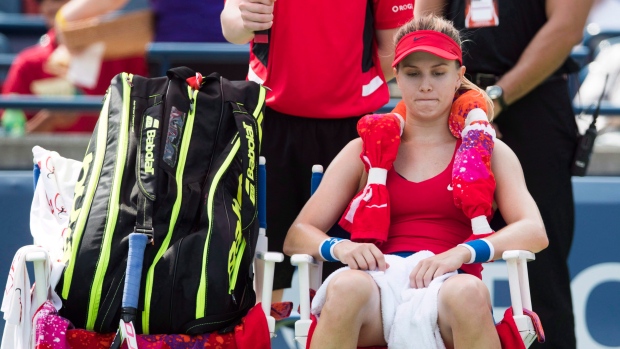 Eugenie Bouchard of Canada sits in her chair between games against Donna Vekic of Croatia during their first-round match at the Rogers Cup WTA women's tennis tournament in Toronto, Ont., Tuesday August 8, 2017. , The Canadian Press

Eugenie Bouchard no longer wants to be the face of Canadian tennis, but for all intents and purposes she’s lost that mantle on merit alone. Bouchard is ranked 74th in the world heading into the U.S. Open, the tennis season’s final major, and has been surpassed in stature by a pair of Canadian teens working their way up the ranks.

While Bouchard might care little how she’s perceived by the Canadian tennis viewing community amid a 12-16 record, including 10 opening round losses in 2017, she may have to worry about the impact on future sponsorship deals. The 23-year-old Montrealer suffered another setback Wednesday at the 2017 U.S. Open, dropping her opening round match to 89th-seeded Russian Evgeniya Rodina in straight sets.

Bouchard’s career earnings on the tour total a little more than US$5.6 million, including US$463,977 this year. By comparison, Forbes estimates Bouchard raked in US$6.2 million in 2016, a year when she pulled in about $550,000 on the court, with the bulk of her earnings coming from lucrative sponsorship agreements.

Those sponsorship agreements, of which financial terms were not disclosed, were largely signed when Bouchard was near the top of the WTA rankings, peaking at number five in the world in October of 2014.

At the time, blue-chip sponsors including Rolex, Nike and Coca-Cola tied their fortunes to not only Bouchard’s meteoric rise, but her personality and reach through social media. Coca-Cola’s 2014 announcement of its deal with Bouchard reads like dark comedy only three years later due to the twists and turns in the tennis player’s career in the interim.

“Her demeanor both on and off the court embodies happiness and active, healthy living; and because of this, she is truly is an inspiration to Canadians and a perfect fit for our company,” the statement read. “We are proud to partner with this rising young star on her journey."

That journey has not just featured a plunge down the rankings due to a series of early exits from major tournaments, but a revolving door of agents, a high-profile spat with former Grand Slam winner Maria Sharapova over the former champion’s doping record, and a lawsuit against the U.S. Tennis Association.

Bouchard sued the USTA after suffering a concussion at the 2015 U.S. Open when she slipped and fell while using the on-site facilities. Bouchard has not reached the fourth round of a major since the incident, which has not yet been resolved before the courts.

While Bouchard’s sponsors have thus far been mum on the player’s performance in recent years, other members of the sports community have been less reticent. During the Rogers Cup this summer, a first-round loss prompted the Westmount, Quebec native to lament the “burden” of representing Canada -- eliciting the ire of another athlete who has donned the maple leaf on numerous occasions.

“Great match @denis_shapo!! See, it’s not a burden it’s a wave of Canadian energy pushing you from behind! Go for it!,” tweeted hockey great Hayley Wickenheiser, simultaneously taking a jab at Bouchard’s comments and praising Denis Shapovalov, one of the presumptive successors as the face of Canadian tennis.

Great match @denis_shapo!! See, it's not a burden it's a wave of Canadian energy pushing you from behind! Go for it! #rogerscup #Shapovalov

18-year-old Shapovalov’s run to the semi-finals of the Rogers Cup catapulted him not just into the national consciousness, but up the rankings as well, landing him 69th in the world among men’s singles players. While he became one of the biggest stories at the Canadian tournament, he certainly wasn’t the only Canadian garnering attention for the right reasons, with Mississauga, Ontario’s Bianca Andreescu making headlines for her tournament debut.

Bouchard welcomed the attention being directed elsewhere, given the glare of the spotlight placed on her during her tumble down the world rankings.

“If the media doesn't put pressure on me, I mean, that would be nice,” she said.

“I think it hurts her marketing appeal significantly in Canada, though it’s not like she’s given fans a lot to cheer about lately,” John Yorke, president of Rain 43, told BNN by phone. “The negative attitude doesn’t help her cause.”

In spite of the possible negative impact at home, Yorke said Bouchard could be better off without the tennis hopes of a nation hanging over her head.

“If she takes the burden of having Canada off her shoulders, maybe that makes things easier on her,” he said. “I think the international segment will still embrace her. All the international fanbase cares about is if she wins.”