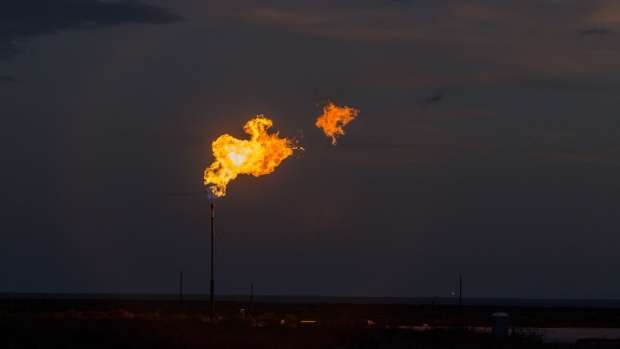 A gas flare is seen in a field at dusk near Mentone, Texas, U.S., on Saturday, Aug. 31, 2019. Natural gas futures headed for the longest streak of declines in more than seven years as U.S. shale production outruns demand and inflates stockpiles. Photographer: Bronte Wittpenn/Bloomberg , Bloomberg

Yet on Tuesday, it was BP’s turn to get pushback from the Texas Railroad Commission when 121 of its flaring requests were up for consideration. The agency postponed a decision until its next meeting, and its newest member slammed the burning of excess gas as a “waste of our precious resources.”

“I am amenable to allowing fair time for flaring to occur in certain circumstances, but limits must be set,” Jim Wright, a Republican who joined the three-member commission this month, said in a statement. Wright’s comments didn’t explicitly name BP, but the London-based company made up the bulk of the permit applications being considered by the agency.

The commission had sought to head off criticism that it’s too lenient over flaring guidelines when it adopted new rules in November that require more detailed disclosures when oil companies seek a permit. Yet that didn’t go far enough to temper criticism over the agency’s traditional hands-off approach.

Oil producers are allowed to flare natural gas in the first 10 days a well is drilled, but anything beyond that requires a permit from the Railroad Commission. The 121 permits BP is seeking for its shale assets would be good through April 2022 if granted.

The regulator routinely receives requests for flaring, which they almost always approve. But BP’s ask is notable for just how many sites it includes, and for how long the company wants permission to flare, said Kelly Mitchell, an oil and gas analyst at Documented, a transparency advocacy group.

“This two-year flaring exception is a real world test of its promises to tackle carbon emissions,” she said. “If BP isn’t serious about reducing routine flaring then the Railroad Commission needs to deny this request.”

Just a few months ago, BP teamed up with Royal Dutch Shell Plc to call on the commission to pursue a policy that would ban routine flaring. The company has pledged to achieve that goal on its own assets by 2030.

BP says the request for flaring permits isn’t inconsistent with those plans. It’s already lowered the rate of flaring on assets the company acquired through its purchase of BHP Billiton’s shale business. The company said it’s “committed to zero routine flaring and will continue to work with the commission on this critical issue.’’

In an earlier statement, BP said it has several projects underway to advance its goal of zero routine flaring but that, in the meantime, “exception permits are necessary for our operations as we continue to pursue our ambition.”

Just before the Railroad Commission met on Tuesday, Rystad Energy released an analysis on flaring on the Texas side of the Permian. The report, commissioned by the Environmental Defense Fund, found that 40% of the flaring expected in 2025 is avoidable at no cost to operators.

The shale boom over the past few years created a massive excess of natural gas, often a by-product of oil in some basins such as the Permian. Although last year saw a sharp drop in flaring as oil drillers shut in output in response to the virus, it’s expected to pick up in future years as production resumes.