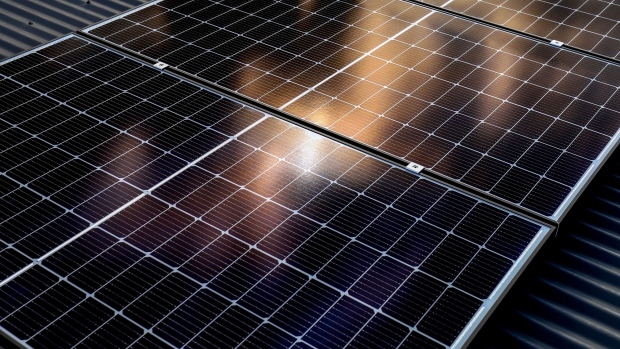 LG Electronics Inc. NeON R 370W solar panels on the rooftop of a residential property in Sydney, Australia, on Monday, May 17, 2021. Australia is the global leader in generating electricity from the sun. Some 27% of buildings had a solar system on their roof at the end of 2020, the highest proportion in the world, according to figures from BNEF. Photographer: Brendon Thorne/Bloomberg , Bloomberg

(Bloomberg) -- In a rare move, a Colorado steel plant is attempting to go green and source most of its power from solar energy instead of coal.

A steel mill in Pueblo operated by Russian manufacturer Evraz Plc that melts and repurposes scrap metal is installing 750,000 solar panels, according to a statement Wednesday. It will come online in November and could fuel almost all of the energy needed by the mill. The solar-powered mill is the world’s first, according to BP, which is financing the project through a joint venture.

The solar-powered facility comes just as some of the biggest U.S. steelmakers get more serious about emissions and set goals to become carbon neutral by 2050. But getting there won’t be easy. Steelmaking remains one of the world’s most polluting industries, accounting for about 6% of global carbon dioxide emissions by some measures. Experts have said switching to renewable energy will be key to reducing emissions.