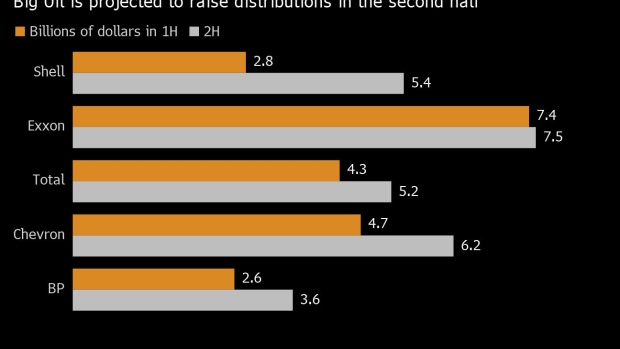 (Bloomberg) -- BP Plc, the first major oil company to announce share buybacks as it emerged from the pandemic, could find that it still has plenty more to do after its rivals announced larger shareholder returns last week.

The biggest oil companies are competing to attract investors as growing climate concerns cool interest in their shares. They are looking to get to the front of the line by promising larger dividends and reinstating stock repurchases as rising commodity prices boost profit. Focus now turns to BP, which will close out Big Oil’s second-quarter earnings on Tuesday.

“I’m sure the management team is feeling the pressure to ratchet up its buyback program after many of its peers have announced new programs,” said RBC analyst Biraj Borkhataria.

Analyst estimates compiled by Bloomberg show that of the five supermajors, BP’s combined dividend and buybacks are expected to lag behind some of the others on a per share and absolute basis in the second half of this year. Chevron Corp. is forecast to return the most for each share that investors hold while Exxon Mobil Corp. has the highest absolute payout in the period, according to the data.

Exxon, still burdened by a heavy debt load, was the only oil major not to announce bigger buybacks last week. Chevron revived repurchases and Royal Dutch Shell Plc topped its return with a surprise dividend hike. TotalEnergies SE will allocate up to 40% of additional cash flow generated above $60 a barrel oil price to buybacks.

Also read: Big Oil Shows Confidence The Era of Large Profits Is Back

BP was the first to announce a $500 million repurchase plan in the first quarter, but that only offsets shares that were given to employees, Borkhataria said. He doesn’t expect BP to follow in Shell’s footsteps, partly because the company is likely to have limited funds for buybacks this quarter.

“However, given strong commodity prices the company could ramp it up ahead of higher expected cash generation in the second half of the year,” he said.