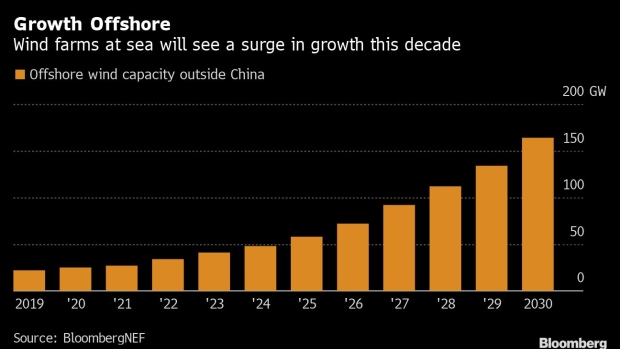 (Bloomberg) -- BP Plc plans to triple its number of offshore wind-farm workers as it expands the business to reach its green goals.

Scaling up wind power is key to the UK oil giant’s plans to produce more renewable energy in the coming years to hit net-zero emissions by the middle of the century. BP aims to next year reach about 800 employees focused on its nascent business to build and operate wind farms at sea, up from about 220 now.

“BP is committed to the energy transition,” Richard Sandford, BP’s vice president for offshore wind in the UK, said in an interview. “Offshore wind is a key component to that story.”

Even with the rapid growth of the unit, offshore wind employees will make up just over 1% of BP’s roughly 60,000 workforce. That highlights the huge shift needed to transition the company from a fossil-fuel giant to a low-carbon one. About half of the growth in offshore wind jobs will come from internal moves, said Sandford, who joined from RWE AG’s renewables unit earlier this year.

Chief Executive Officer Bernard Looney kicked off BP’s green shift in 2020, pledging to quickly scale up renewables as it moves away from the oil-supermajor business model. The company has since grown its pipeline of offshore wind farms, with projects in the UK and US as well as plans to expand in Japan and the Netherlands.

So far, all of BP’s offshore wind projects are set to use turbines fixed to the seabed. But floating technology, which has been pioneered by the oil and gas sector, could unlock vast new expanses of the sea for development. That will be key in places like Japan and California, where waters are too deep for conventional structures.

The company is in the process of hiring a head of floating wind to lead the new business focus. Its first foray into floating projects may come in the UK, where the Crown Estate is set to open new leases in the Celtic Sea.

“Floating will play a key role in our strategy,” Sandford said. “In the oil and gas business, floating structures are something that’s very common and BP have great expertise in that area.”