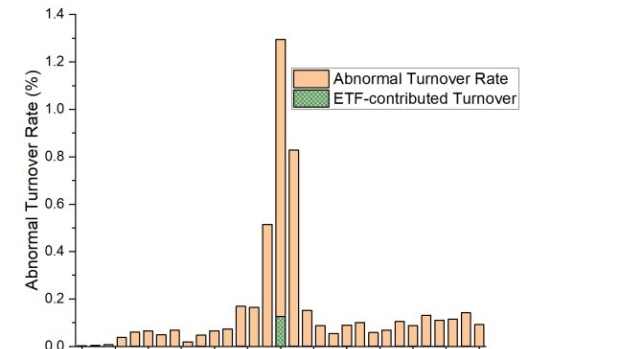 (Bloomberg) -- In 1991, Nobel laureate William Sharpe dropped a bombshell on the finance world with a paper arguing the “average” active manager will always lose out to passive strategies after fees.

His insights helped pave the way for a more than $10 trillion index-fund frenzy over the next three decades, yet they hinged on some key assumptions -- including that active managers “must pay more for trading.”

But it’s not like index investors get their shares for free.

In the last few minutes of trading on Friday, equity volumes will explode as funds managing trillions adjust for the annual reconstitution of the FTSE Russell indexes, instantly making this one of the busiest days of 2022. And if one recent research paper is correct, a majority of them will be paying nearly three-times the going rate for every trade -- costs that could be lessened with a few simple strategies.

The exact cause of this surge in costs is up for debate, with some saying nimbler players are exploiting the predictable purchases of index funds by buying first. Others say flatly that there is nothing to see here -- that it’s natural to pay more for such big adjustments. But the upshot is that it’s getting tougher to dismiss passive trading costs.

In it, Li -- then a PhD student at the University of Illinois Urbana-Champaign -- crunched data through 2020 to show that a share rises 67 basis points on average in the five days before it’s bought by a transparent U.S. equity exchange-traded fund and slips 20 basis points in the subsequent 20 days. The 67 basis-point “execution shortfall” he found compares to 24 basis points for other institutions, according to an earlier research paper.

The idea is that passive vehicles are hitched to the public rebalance schedules of indexes like the S&P 500, so when stocks are added to the gauge, the trillions tracking it have to snap them up typically on the same day. That bombards the market with such massive and predictable orders that the funds end up paying a premium.

“It’s important because for mom-and-pop traders, they just buy and hold,” Li said by phone. “They don’t realize there are transaction costs associated with the ETFs.”

He isn’t the first to document this kind of phenomenon -- other academics and researchers have fretted over these kinds of distortions for years. In fact, last July FTSE Russell itself announced an internal review of its rebalance frequency.

Turnover during the 2021 reconstitution jumped 45% from a year earlier, the firm said after the event. It noted that “a record 2.37 billion shares representing $80.8 billion were executed in the Nasdaq Closing Cross in 1.97 seconds, while 2.1 billion shares were traded on NYSE -- their fifth largest NYSE Closing Auction ever, with $105.1 billion in notional value traded.”

A spokesperson at the London Stock Exchange Group, which owns the FTSE Russell indexes, said there’s no update on their review.

Li’s claim that arbitrageurs are pushing up trading costs is a contentious one. To Antti Petajisto, who documented the so-called index effect -- where stocks enjoy a bump in performance after being added to an index -- as a finance professor at New York University in 2010, Li’s results show there’s a case for spreading rebalancing trades across the day or even a few days. But he stresses transparency is actually a win-win for both arbitrageurs and ETF providers.

“If you want to minimize your transaction costs, you want to make it as easy as possible for others to take the other side of your trade,” said Petajisto, who has worked as a quant portfolio manager since 2011.

On the other side of the debate, Li argues that opacity helps. For one example, he looked at two products tracking the same index, and found that a Vanguard Group fund outperformed one from BlackRock Inc. by 7.3 basis points each year owing to the differences in their rebalancing mechanics. The latter tends to disclose its ETF holdings every day and rebalance on known dates, while the former announces holdings only at month-end, allowing it to spread out its trades and disguise its footprint.

Vanguard’s staggered rebalance explains why their ETFs start to diverge from indexes slightly around rebalancing dates. But Li finds the drag from the average tracking error on such “alternative rebalance” strategies isn’t enough to negate the saved trading costs.

“There are two things going on,” said Li. “The first is whether you disclose it or not. The second is whether you dump everything on the rebalancing day at the closing price.”

Samantha Merwin, head of ETF markets advocacy at BlackRock, said transparency helps market makers provide liquidity while giving investors visibility into their portfolios. With the goals of minimizing tracking error as well as trading costs, the asset manager might also trade outside of the close on rebalancing days as needed, she said. A spokesperson for Vanguard said that by enabling some market participants to trade in advance, daily holdings disclosures might lower returns.

To some academics, the frenzy of the index-rebalancing day is simply a mystery. A paper in February also showed that reconstitution-day volumes were more than three-times larger than the amount traded by ETFs. The researchers struggled to explain it, as theoretically active managers taking advantage of the scheduled public rebalance should be buying in the lead up to the rebalance, not on the day itself. It was a phenomenon also noted in Li’s results.

Sharpe didn’t immediately respond to an email seeking comment. In his paper, “The Arithmetic of Active Management,” he appeared to anticipate the potential effects of index followers and discretionary managers interacting. In the footnotes, Sharpe observed that passive funds “may have to trade with active managers, because of the active managers’ willingness to provide desired liquidity (at a price).”

Still, more than $900 billion flowed into US ETFs last year, shattering all records, with the biggest passive funds scooping up most of it -- meaning however predictable their transactions are, trading ahead of them might remain profitable.

“There definitely still is an index effect, although the market has become more efficient,” said Petajisto from San Francisco. “Consequently, the effect has become less predictable over time.”