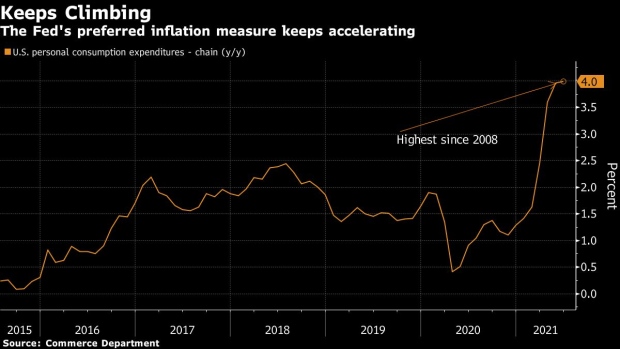 Lael Brainard, governor of the U.S. Federal Reserve, listens during a Bloomberg Television interview at the spring meetings of the International Monetary Fund (IMF) and World Bank in Washington, D.C., U.S., on Thursday, April 11, 2019. The IMF cut its outlook for global growth to the lowest since the financial crisis amid a bleaker outlook in most major advanced economies and signs that higher tariffs are weighing on trade. , Bloomberg

(Bloomberg) -- The U.S. jobs market still has some ways to go before it improves enough to satisfy the Federal Reserve’s criteria for beginning to reduce its asset purchases, Governor Lael Brainard said Friday.

In the text of a speech to be delivered to the Aspen Economic Strategy Group, Brainard also suggested that the recent surge in inflation is likely to prove temporary and said that she saw both upside and downside risks to the economy, the latter from the spread of the Delta variant of Covid-19.

The Fed is currently buying $120 billion of assets per month -- $80 billion of Treasury securities and $40 billion of mortgage backed debt -- and has pledged to keep up that pace “until substantial further progress” has been made toward its goals of maximum employment and 2% inflation.

Fed officials meeting earlier this week said they would continue to assess that progress at coming meetings.

Saying that it was difficult at the moment to disentangle the various forces at work in the labor market, Brainard said she expected to be better able to assess the progress the Fed is making toward its maximum employment goal once economic data for September are released.

That suggests she’d be in favor of putting off any decision by policy makers to taper asset purchases until after their next scheduled meeting on Sept. 21-22.

Brainard said repeatedly throughout the speech that she was attentive to the risks that inflationary pressures could prove persistent and that inflation expectations could move above the Fed’s 2% goal.

But she made clear that was not her base case.

“Recent high inflation readings reflect supply–demand mismatches in a handful of sectors that are likely to prove transitory,” she said, adding, “Many of the forces currently leading to outsized gains in prices are likely to dissipate by this time next year.”

The personal consumption expenditures price index that the Fed targets rose 4% in June from a year earlier.

Brainard said she didn’t see any signs that the elevated price readings were feeding into inflation expectations in such a way to push them above the Fed’s 2% objective.

The Fed governor said she expects economic growth to remain strong through the balance of the year. Gross domestic product rose at a 6.5% annualized rate in the second quarter, following a 6.3% gain in the first three months of the year.

“There are risks on both sides of the outlook,” she added.

The upside risk is associated with the high level of household savings, while the downside risk stems from the Delta variant, according to Brainard.

“While the economy’s momentum is strong, vaccination rates remain low in some areas, and fears related to the Delta variant may damp the rebound in services and complicate the return to in-person school,” she said.

Brainard has been a Fed governor since 2014. Some Fed watchers see her as a potential candidate to replace Chair Jerome Powell when his four-year term ends in February.