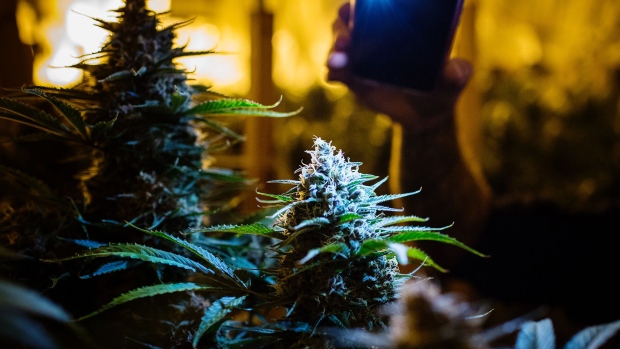 Cannabis plants are inspected under the lights of a smartphone and a headlamp at a craft grow operation outside of Nelson, British Columbia, Canada, on Thursday, Nov. 8, 2018. , Ben Nelms/Bloomberg

(Bloomberg) -- Canadian cannabis brands are having a tough time getting consumers to notice them.

No brand in Canada has more than 41% recognition among current cannabis users, with most languishing between 1% and 15%, according to a survey of 3,000 consumers conducted by pot data firm Brightfield Group.

Even those that attract the most attention aren’t converting that awareness into purchases. While Canopy Growth Corp.’s Tweed and Aurora Cannabis Inc.’s Drift have the widest brand awareness at 41% and 34% respectively, less than half of consumers familiar with those brands actually go out and buy them, according to Brightfield’s report.

“Industry players have primarily focused on raising capital, but this has not inherently translated into strong customer relationships,” the report says. “As the market becomes more consumer-centric, brands must focus on developing a deep understanding of the competitive landscape and consumer behavior to stay relevant and ensure they don’t risk being seen as a commodity.”

Unlike more mature consumer markets, the brands that attract the highest levels of satisfaction aren’t necessarily those with the most awareness either.

What does this mean for Canadian cannabis companies, according to Brightfield? “For now, it’s anyone’s game.”

A U.S. Food and Drug Administration study of CBD products shows the category is still very much the Wild West.

Perhaps most troubling for those consumers who choose CBD because they’re not comfortable with its psychoactive cousin THC, 49% of the products tested contained some measurable amount of THC or the closely related compound THCA.