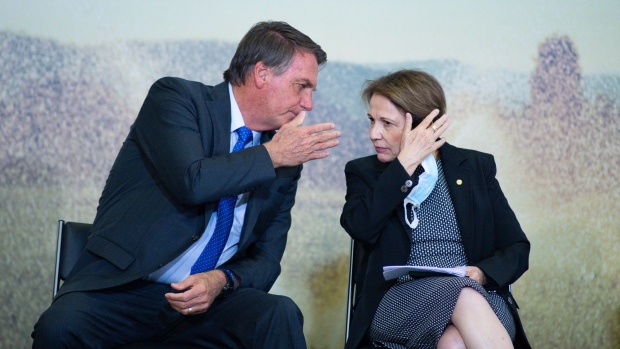 Jair Bolsonaro, Brazil's president, speaks to Tereza Cristina, Brazil's agriculture minister, during the launch event of the Banco do Brasil SA Agro Investment Program at Planalto Palace in Brasilia, Brazil, on Tuesday, Aug. 24, 2021. Bolsonaro is growing uneasy about Brazil’s inflation in the run-up to general elections next year, but his complaints about rising prices don’t mean he plans to interfere with the central bank, according to five people close to him including cabinet members. , Bloomberg

(Bloomberg) -- Brazil’s Agriculture Minister Tereza Cristina tested positive for Covid-19, the second member of President Jair Bolsonaro’s cabinet to be diagnosed with the virus this week.

The minister said on her Twitter account on Friday morning that she’s doing well and will remain in isolation, following medical advice.

The president himself is in isolation in Brasilia after his health chief was diagnosed in New York, where he was part of Brazil’s delegation to the United Nations. Cristina didn’t join the trip, according to her public schedule, which shows she has met with leaders of several farming groups and other government officials over the past few days, including Infrastructure Minister Tarcisio Freitas.

On Thursday evening, Bolsonaro said on social media two more people had tested positive. He declined to name them, but added that “everyone knows them” and that they both had been vaccinated. Bolsonaro has shunned Covid vaccines, saying he’ll only take one once every Brazilian that wants to has done so.