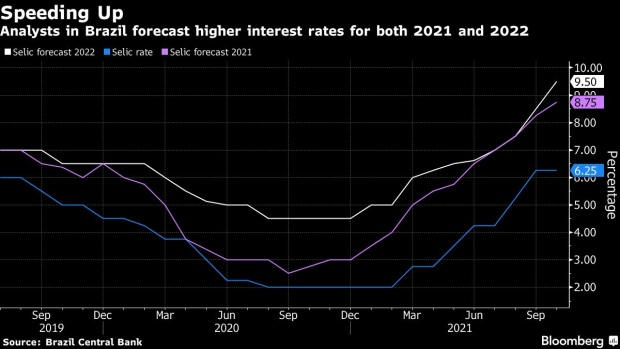 (Bloomberg) -- Brazil analysts expect a higher interest rate both this year and next after the government said it would circumvent the public spending cap to increase spending on the poor.

President Jair Bolsonaro announced last week plans for cash transfers to the poorest that would be financed either by a waiver or changes to the spending cap rule. The increased spending, coupled with a fresh plunge in the currency, are boosting bets that policy makers will have to raise borrowing costs faster. The central bank will meets over rates Tuesday and Wednesday.

With annual inflation running above 10%, policy makers led by Roberto Campos Neto had promised their third consecutive rate hike of a full percentage point this week. But now analysts at major Wall Street firms expect them to deliver an increase of at least 125 basis points.

Brazil’s central bank has been the most aggressive in the world, raising interest borrowing costs consistently since March, to 6.25%. Policy makers target inflation at 3.75% this year and 3.5% in 2022.

Economic activity is already showing signs of a slowdown. Most analysts now expect economic growth of just 1.4% next year.