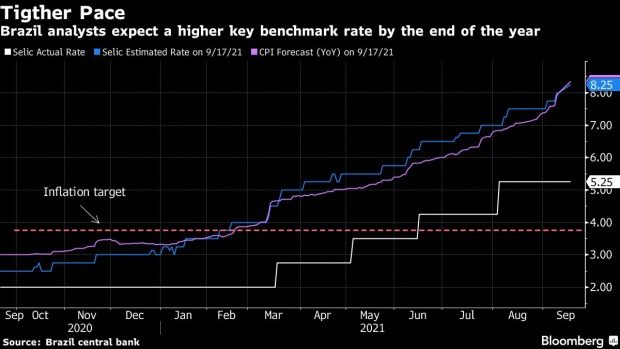 (Bloomberg) -- Brazil analysts raised their benchmark interest rate forecasts for this year and next ahead of Wednesday’s central bank monetary policy decision.

Policy makers led by Roberto Campos Neto will lift the benchmark Selic to 8.25% at the end of this year, above the previous estimate of 8%, according to a central bank survey published on Monday. Their forecast for the interest rate in 2022 was also raised to 8.5% from 8%. It’s the third straight week analysts have lifted those projections.

In the survey, analysts raised their estimates for year-end inflation for the 24th straight week, to 8.35%. Estimates for 2022, which are a key focus for central bankers, now stand at 4.10%, marking the ninth straight increase.

Central bankers are expected to deliver their second consecutive full percentage point rate hike this Wednesday, taking the Selic to 6.25%.