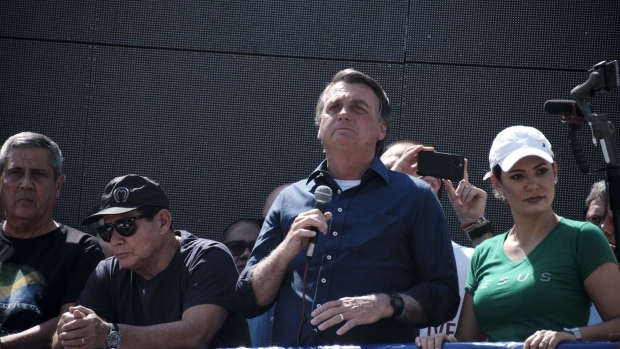 Jair Bolsonaro, Brazil's president, center, speaks during an Independence Day rally in Brasilia, Brazil, on Tuesday, Sept. 7, 2021. Bolsonaro has urged Brazilians to come out in force on Tuesday to show their support for his government, an event that is shaping up to be an all-or-nothing gauge of his chances of re-election. , Bloomberg

(Bloomberg) -- Brazilian markets jumped before the close of Thursday trading after President Jair Bolsonaro released a statement aimed at easing tensions with the country’s Supreme Court.

“I never intended to attack” any branch of government, Bolsonaro said in a statement released by his office. “The harmony between them is not a wish of mine, but a constitutional order that all, without exception, have to respect.”

Stocks reversed losses to climb as much as 2.6%, while the Brazilian real jumped 1.9%, by far leading gains among emerging-market currencies. Brazilian assets had tumbled on Wednesday after Bolsonaro hurled strong criticism at the Supreme Court and electoral authorities in protests the day before, muddying the country’s political and economic outlook.

“Bolsonaro’s remarks show some truce between branches,” said Fernando Siqueira, a portfolio manager at Infinity Asset Management. “That’s very welcome at a moment when Brazil grapples with other issues including high inflation and fiscal concerns.”

The statement goes on to cite Supreme Court Justice Alexandre de Moraes, who has been the target of much of Bolsonaro’s aggressive rhetoric over the past few weeks. His comments, Bolsonaro wrote, “were made in the heat of the moment,” adding that he continued to disagree with the justice over some decisions.

Moraes is in charge of the so-called “fake news inquiry” at the court, which has targeted the alleged spread of misinformation by Bolsonaro allies.

The president has been sparring with the top court over what he says are rulings beyond its authority, and with electoral authorities over unsubstantiated claims of voter fraud.

“I reiterate my respect for the institutions. This is what democracy is: the executive, legislative and judicial branches working together in favor of the people and respecting the constitution,” the statement reads.

Veja magazine was first to report on the statement, saying the idea came after Bolsonaro met with former President Michel Temer.